It was rather cold at wake up time in Kimberley and team Lipstick decided to have breakfast on the road and head straight towards Bloemfontein on the way to home.

In Bloemfontein it was decided that due to the cold climate it would be necessary to stop and purchase warm sweaters at the huge waterfront shopping mall in Kimberley.

Geared up now with something warmer to wear than the normal T-shirts made the temperature of 15 degrees more bearable and the final stretch towards East London was taken on. Lipstick was delayed by 2 major road works along the route but some high speed driving eventually resulted that Lipstick arrived on the East London Beach front at 5pm

TheGarmin showed a speed of 170km/h

Many friends and family members welcomed the team with great applause and prepared snacks and drinks for the welcoming party at table 58.

Many a tale was told by team Lipstick and this extremely exciting trip now reached its finality.

Both Andre and Willy are thankfull that no major problems occurred which could not be solved whilst on route and especially a big thank you to the following people:

Cherie Myburgh from MSD VisaPak for arranging all the visas

Kingsley Seiler from www.go2websites.co.za for putting Lipsticks daily blogs on the web.

Dr.ChristophSchoell from Germany who prepared all medical requirements and arranged a pack of usefullmedicin  ( fortunately only some Imodium and disinfecting cream was used)

All friends and family who followed the team on the trip through what’s app and the webpage – your comments every now and then were always encouraging.

Nathan– (Andre’s youngest son) our man at the base in East London who was on standby for any problems.

It has been a great adventure with something new after every bend , after every mountain and after every day – Team Lipstick salutes all those who have done the route before or will do it in future with the words of Mark Twain:

Twenty years from now you will be more disappointed by the things that you didn’t do than by the ones you did do. So throw off the bowlines. Sail away from the safe harbour. Catch the trade winds in your sails. Explore. Dream. Discover. – Mark Twain 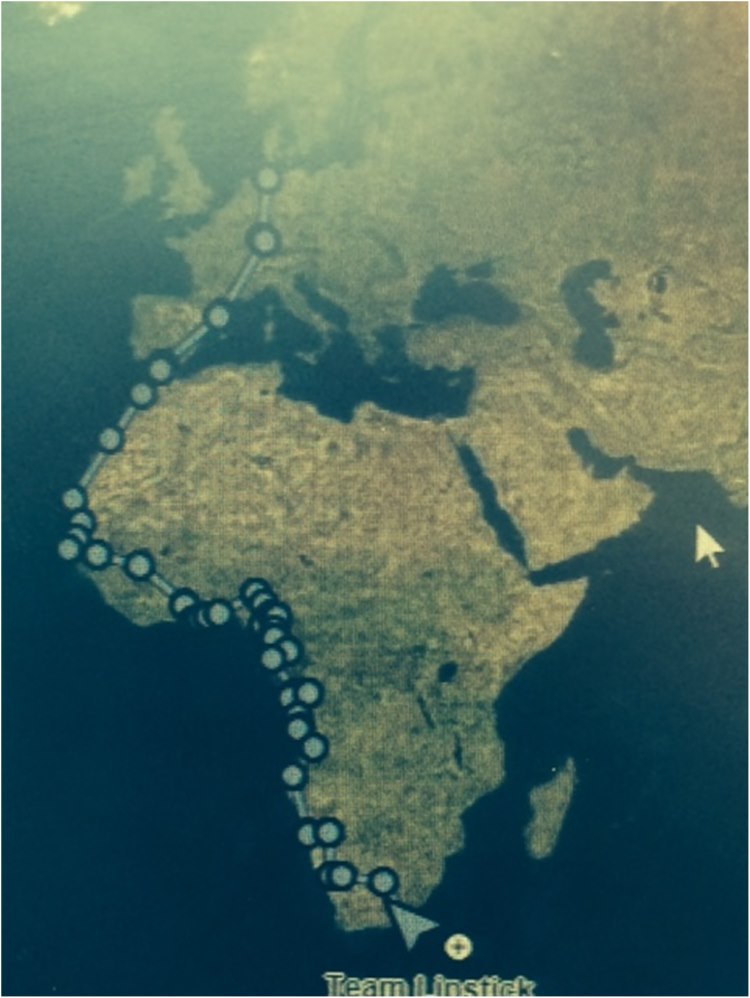 It has been a great adventure

Day 59 – From Kimberley to East London