Tashkent is the capital of and the most cosmopolitan city in Uzbekistan. It was noted for its tree-lined streets, numerous fountains, and pleasant parks, at least until the tree-cutting campaigns initiated in 2009 by local government.

Since 1991, the city has changed economically, culturally, and architecturally. New development has superseded or replaced icons of the Soviet era. The largest statue ever erected for Lenin was replaced with a globe, featuring a geographic map of Uzbekistan. Buildings from the Soviet era have been replaced with new modern buildings. 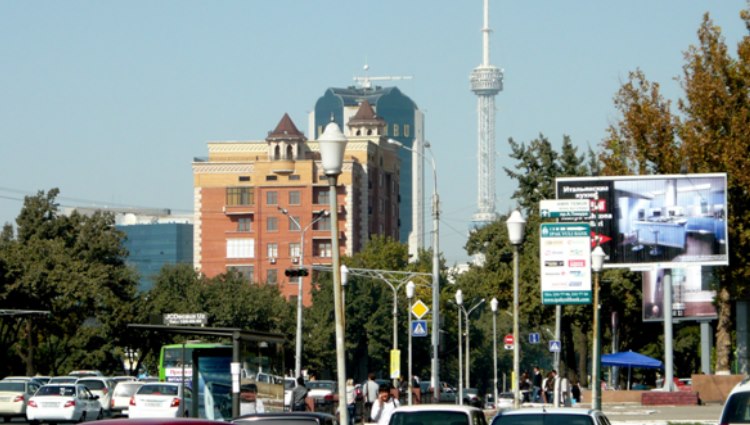 The streets of Tashkent….

A soccer stadium in Tashkent…

Some 40 km out of town team Lipstick was flagged down by police and shown a speed gun which indicated that Lipstick was travelling at 97 km/h in a 50km zone.

Of course the boys argued that they never saw a 50km speed limit sign but the officer was not really listening as his English was non existent.

With wild gestures he explained that there are 2 possibilities:

Team Lipstick would then have to pay the fine there and then.

From there on Lipstick adjusted a bit more to the speed of surrounding vehicles whilst driving on mostly double lane highways to Samarkand.

“Diesel – no no not available”

Same with the third station and the team were starting to get slightly worried – can it be that Uzbekistan run out of Diesel? Surely not there are trucks all over!

Fourth station and –Voila: “Diesel – no problem –you pay cashier”

This meant that before one gets a drop of Diesel one needs to work out how many litres one would need and then go to the office where the cashier sits and pay him accordingly – he then switches the electricity on for the pump which is pre-set to deliver not an ounce more than the 130l team Lipstick requested.

So Andre crapped about half a kilogramme of the Uzbekistan currency – Som- and paid the cashier and the pump started to work.

With a lot of new roads having been built around Samarkand the Garmin could not really cope so the boys reverted to Cell Phone navigation and Google maps and landed in Samarkand in the early afternoon.

Samarkand is one of the oldest inhabited cities in Central Asia. There is evidence of human activity in the area of the city from the late Paleolithic era, though there is no direct evidence of when exactly Samarkand proper was founded, some theories are that it was founded between the 8th and 7th centuries BC.

Prospering from its location on the Silk Road between China and the Mediterranean, at times Samarkand has been one of the greatest cities of Central Asia.

By the time of the Achaemenes Empire of Persia, it was the capital of the Soudansatrapy. The city was taken by Alexander the Great in 329 BC, when it was known by its Greek name of Marakanda. The city was ruled by a succession of Iranian, Persian, and Turkish peoples until the Mongols under Genghis Khan conquered Samarkand in 1220.

Today, Samarkand is the capital of Samarqand Region, and Uzbekistan‘s third largest city. 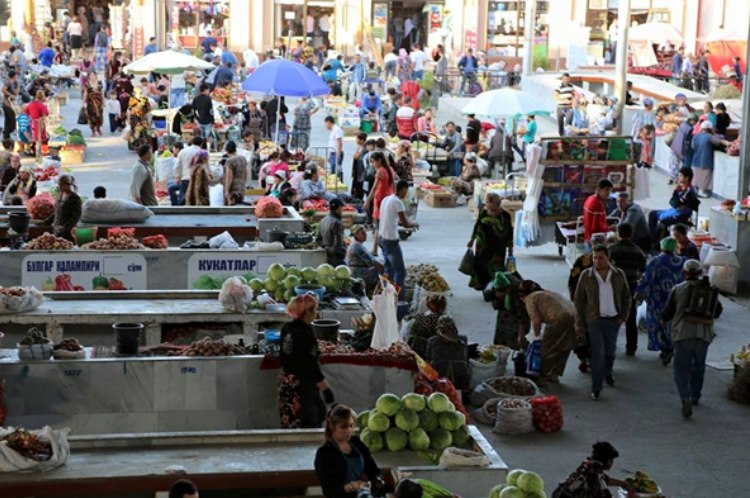 Like most towns in this region Samarkand also has a local market for traders of all sorts.

The Gūr-i Amīr or Guri Amir (is a mausoleum of the Asian conqueror Tamerlane (also known as Timor) in Samarkand, Uzbekistan. It occupies an important place in the history of Persian-Mongolian Architecture as the precursor and model for later great Mughal architecture tombs, including Gardens of Babur in Kabul, Humayun’s Tomb in Delhi and the Taj Mahal in Agra, built by Timur’s Persianised descendants, the ruling Mughal dynasty of North India. 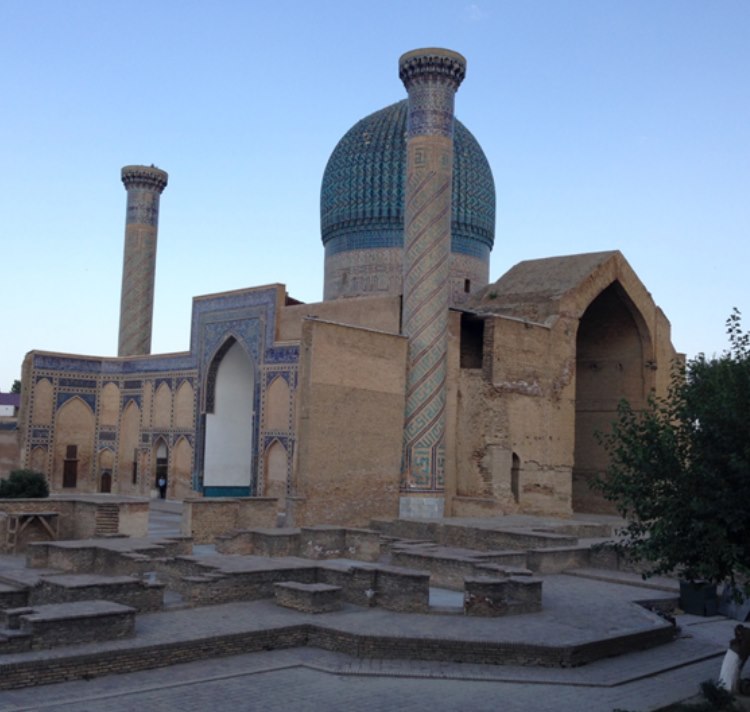 The Guri Amir mausoleum in Samarkand… 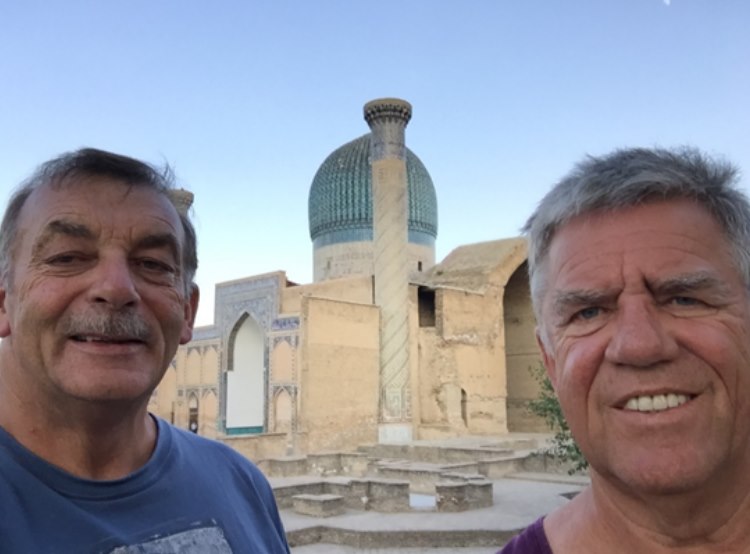 The Registan was the heart of the ancient city of Samarkand of the Timurid dynasty, now in Uzbekistan.

The name means “Sandy place” or “desert” in Persian.Now the reader might understand why so many countries here end with “Stan” like UbekisSTAN

The Registan was a public square, where people gathered to hear royal proclamations, heralded by blasts on enormous copper pipes called dzharchis – and a place of public executions. It is framed by three madrasahs (Islamic schools) of distinctive Islamic architecture. 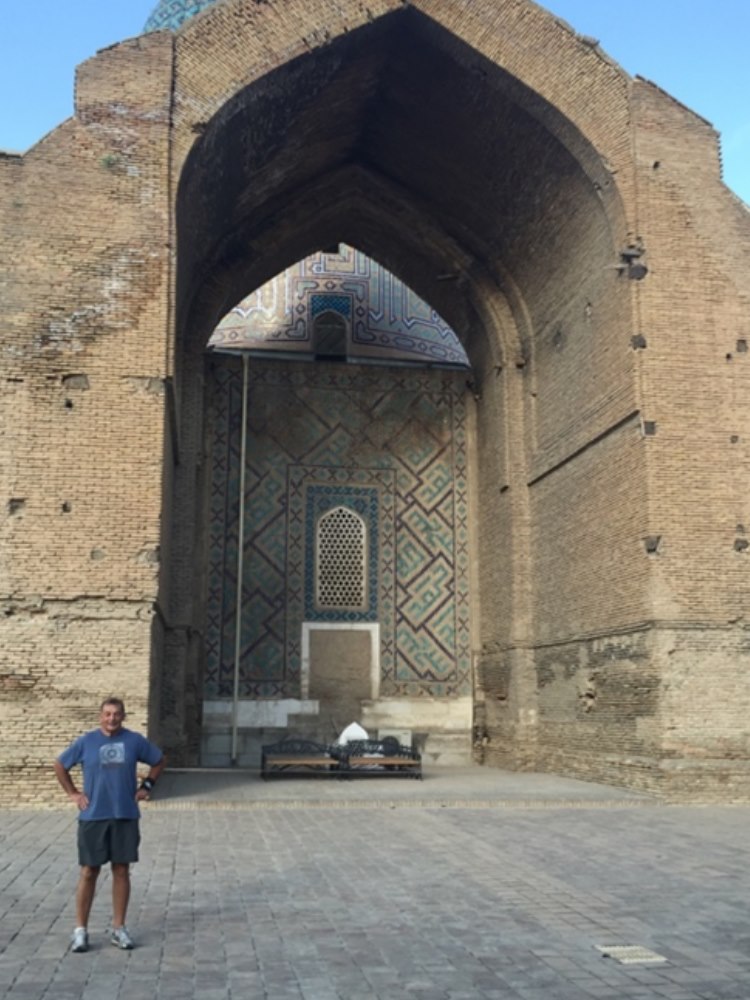 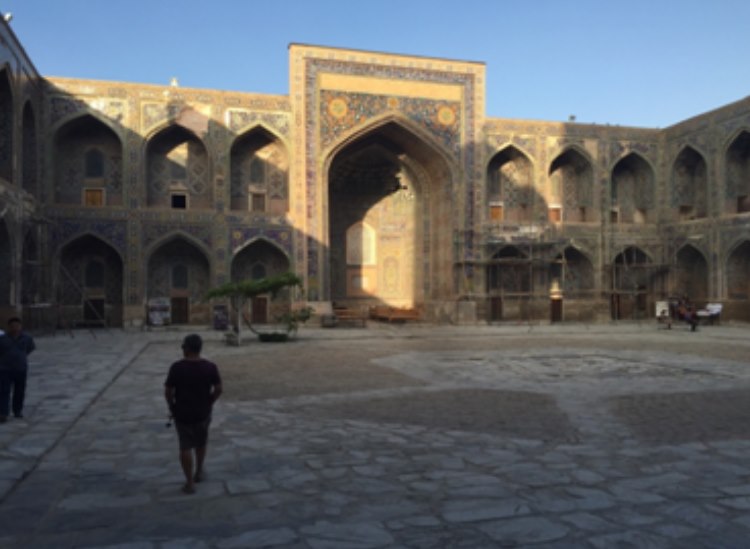 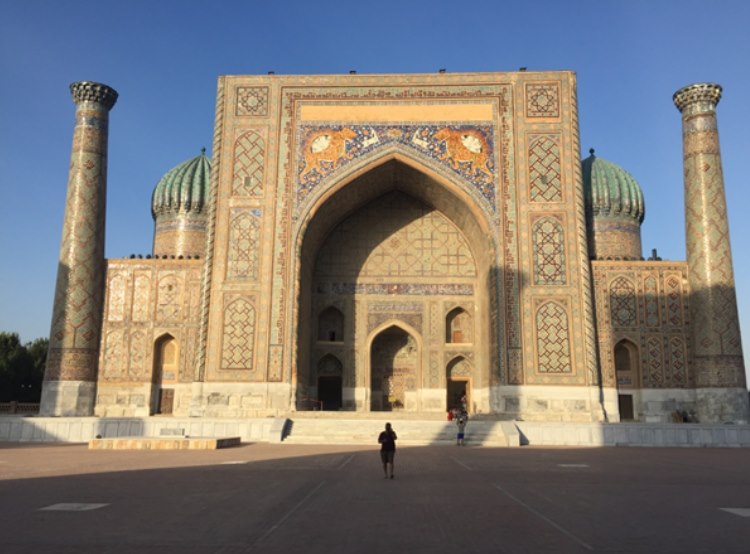 Samarkand is really a beautiful city in Uzbekistan with many many parks and building from years gone by and one can imagine the trade which went on here during the high time of the silk trading activity with Samarkand being one of the most important stops when travelling west or east in pursuance of trading, buying and selling.

The evening was spent in the most important restaurant and yet another Landmark in Samarkand… The Samarkand Restaurant! 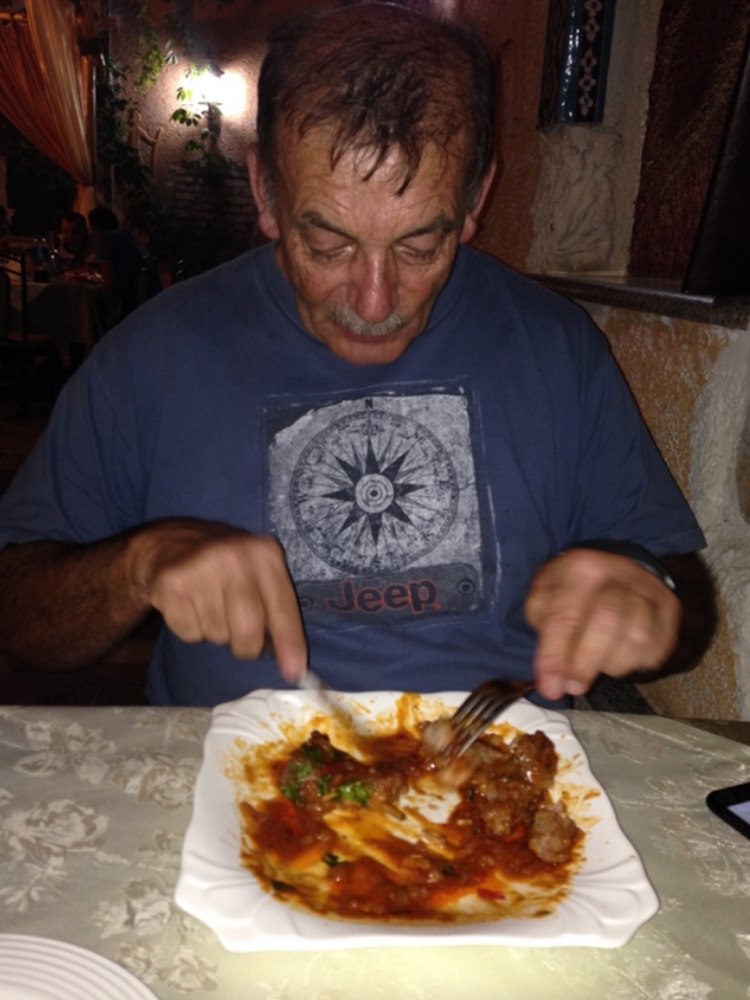 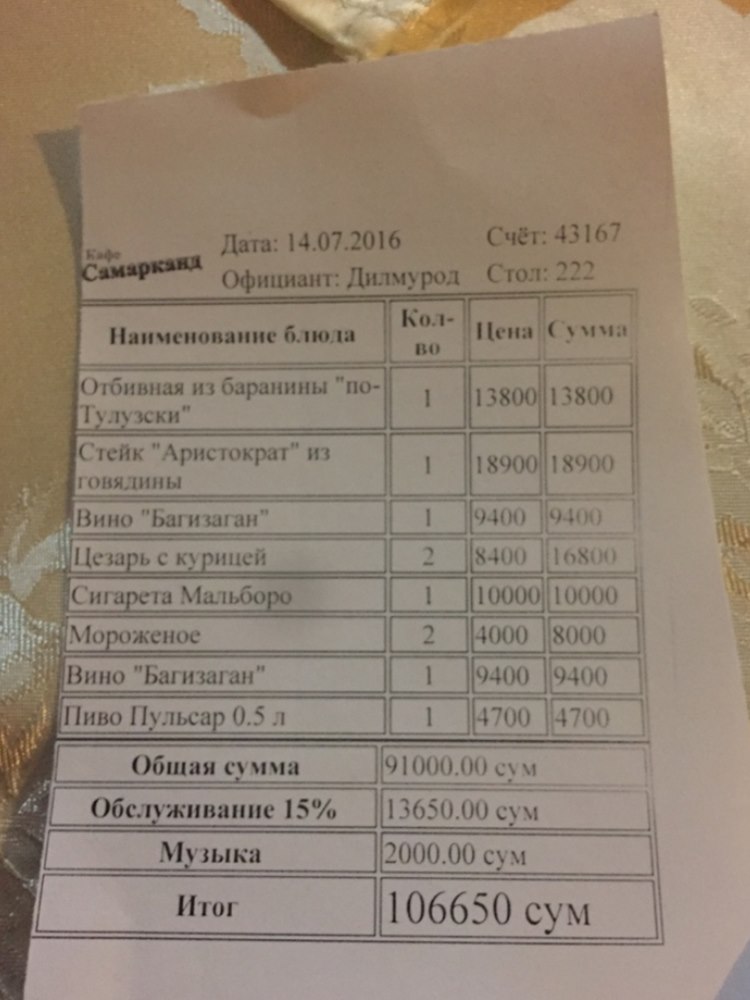 Good food, nice drinks in a Russian restaurant in Samarkand with also good but strange sounding music saw this day nearing the end 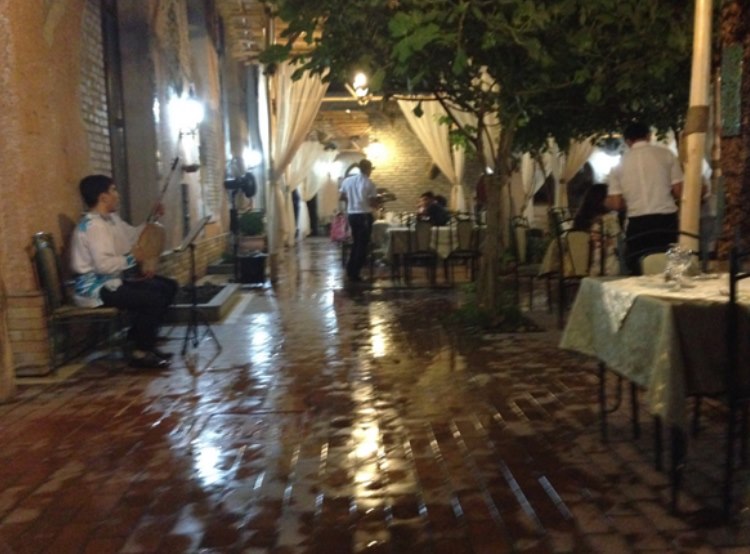 The floor in this outside atrium gets sprinkled with water which then reflects a cooler air during the evaporation period….