Rest day at Watamu. Just chilled out in the morning and watched rugby in the afternoon. Well done Sharks! We went to a local restaurant where the food was reasonable except for the hot hot black chillies – never again to order their hot food.

Sunday and on the road again. This time through Malindi and on to Tsavo East. Just outside the park entrance we turn down to crocodile camp. This is where on our previous visit to Kenya (Paul, Michelle, Lyn and Denys) the manager fed the crocodiles. He would hit on a metal plate and the crocodiles would come out of the water and he would feed them. The camp however was closed for the off season.

In the park the roads are pretty corrugated. Saw a few herds of elephant. One herd had an enormous elephant with huge tusks which were curved inwards. I’m sure it was the same one that charged us the last time we were in Tsavo. Did not see many other animals unfortunately.

The plan for the night was to stay in Kilimanjaro Lodge which was on the west side of Tsavo West, which meant if we followed our intended route we would have to travel through Tsavo West. All teams including Tomcat (Charl and Mike who had now joined up with us) decided that we would rather go round the bottom of the game park and camp at the base of Kilimanjaro. Unfortunately, which seems to be the norm nowadays, the roads were terrible with potholes and dust like talcum powder. Luckily we found a mission station as it was getting dark and the Father in charge allowed us to camp in the unused school building. All the tents were erected inside the building except for Icevan for as usual we only had to climb into our beds inside the vehicle. Used our hot water shower on the van for the first time tonight which was really terrific after all the dust.

Handed over a box of rehydration spoons to the Father for the community. Hopefully to help the problems in the community in a small way.
A fantastic evening braai with children all helping to gather wood for us with a reward of sweets. There was a lot of disappointment as the mountain was completely covered in cloud. Hopefully tomorrow the will lift. 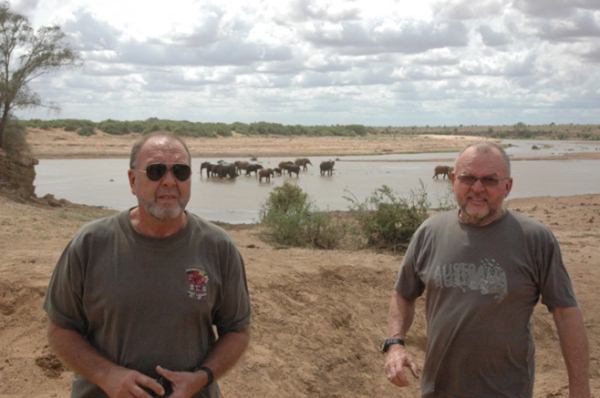 No luck today as the cloud cover is still there.Talcum powder again for approx 45km. Needless to say that by this stage everybody and everything was covered in dust. It was an early start for Nairobi for we had a few hundred kilometers to go expecting to have the dust all the way. One can imagine how welcome it was when suddenly a brand new tar road appeared which joined up to the Mombasa- Nairobi road.

The road to Nairobi had more trucks on than we have ever seen which made the ride absolutely nerve racking. The main road to Nairobi however was only a taste of how the drivers are in town. Nairobi traffic is horrendous, but we reach our destination, Jungle Junction unscathed.

As we were not able to get our Sudanese visas in EL we don’t even unpack but get a taxi to take us to the Sudanese embassy for we don’t know how long it will take. Everything is very easy and hopefully we will have them by tomorrow without a hitch.

Late afternoon and 2 vehicles have already been serviced and ready for our journey forward. Met some travelers who have just come down from the north. They tell us that we are in for a shock as the road ahead will take 2 to 3 days for about 300km.

Lots of discussion tonight as to which road to take.