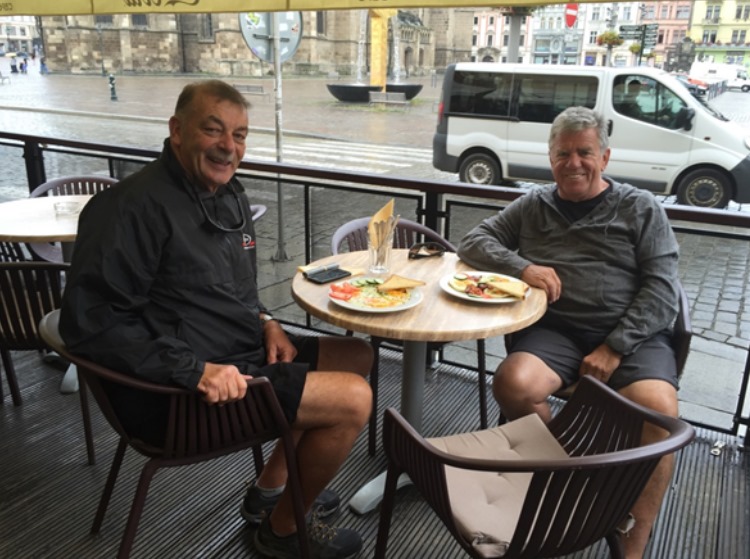 Today also marks one of only a few days with some rainy weather and rather low temperatures which could however not dampen the high spirits of the boys when they arrived in Pilsen for a breakfast on a roadside Café.

Plzen also called Pilsen in English and German, is a city in western Bohemia in the Republic. About 90 kilometers west of Prague, it is the fourth most populous city in the Czech Republic.

The city is known worldwide for Pilsner beer, created by Bavarian brewer Josef Groll there in 1842.

The officials of Plzen founded a city-owned brewery in 1839, Bürger Brauerei (Citizens’ Brewery )and recruited Bavarian brewer Josef Groll (1813–1887) who produced the first batch of modern Pilsner beer on 5 October 1842.

The combination of pale color from the new malts, Pilsen’s remarkably soft water, Saaznoble hops from nearby Žatec and Bavarian-style lagering produced a clear, golden beer which was regarded as a sensation.

Improving transport meant that this new beer was soon available throughout Central Europe and Pilsner Brauart-style brewing was widely imitated. In 1859, “Pilsner Bier” was registered as a brand name at the Chamber of Commerce and Trade in Plzeň. In 1898, the Pilsner Urquell trade mark was created to put emphasis on it being the original brewery.

It is worthwhile noting that the South African Brewery bought the Pilsner Brewery in 2002 but kept the tradition of the brewing process going – Pilsner Urquel is only available in green bottles and has a rather low alcohol content of only 4.4% 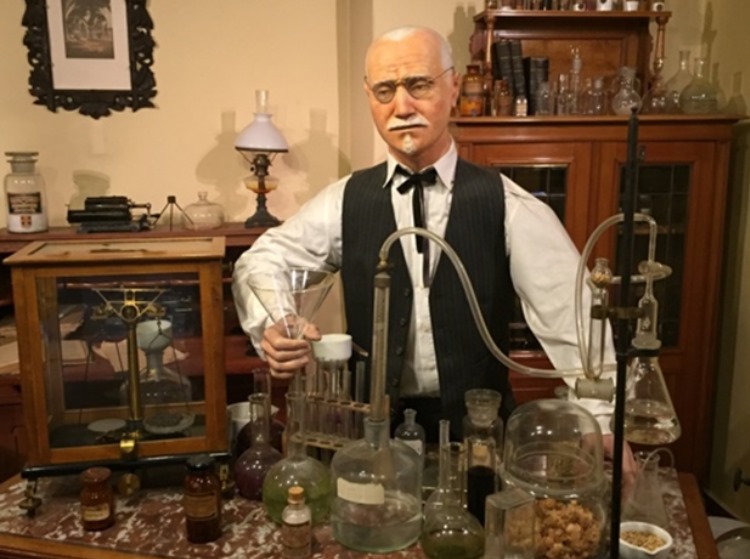 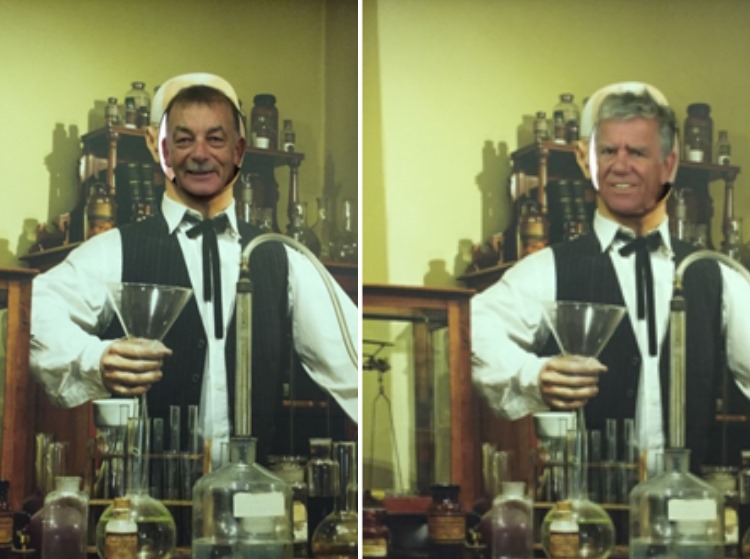 Many great brewmasters created this world famous beer over the years and the brewery also has a museum showcasing the equipment used some 150 years ago in the brewing process and bottling plant.

First round of beer ….in the Brewery pub in Pilsen

A few days ago Team Lipstick was contacted by their old friend Hans Trumert who was currently on leave in his home town in Bavaria and Hans kindly invited them for a visit whilst on route to Munich.

Hans himself is a brew master with close to 60 years of brewing experience and the obvious choice was to visit him in his home town close to Grafenwinn in Germany which gave the boys a nice drive through the lovely smaller villages of the german province Bavaria.

Hans stayed with his sister Rosi who often visited Hans in South Africa and a great time was had with Hans and Rosis family in this picturous Bavarian village where Hans grew up many moons ago.

I true tradition to the area and Hans’s profession the boys had to down a few more lovely beers which are brewed in this area and the tasted great indeed.

Second round of beer in Grafenwinn – the hometown of Hans 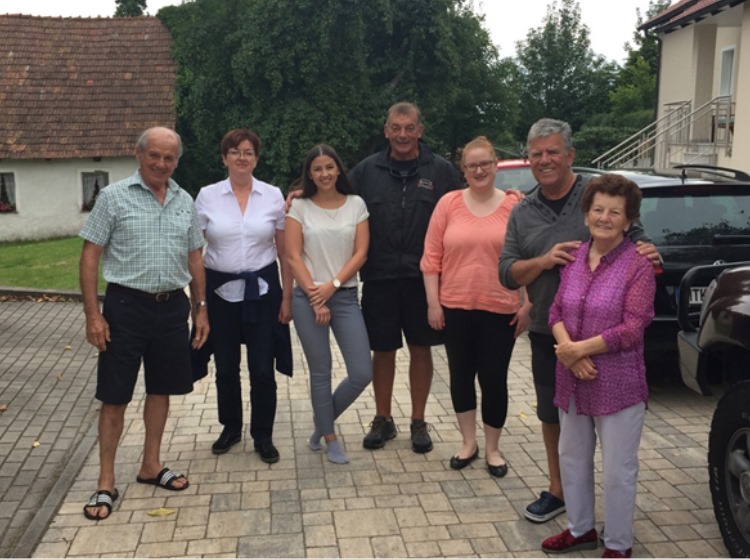 So off to Munich which is by itself a famous City not only due to its history but also due to having the most famous beer pub in the world – the Hofbrauhaus! 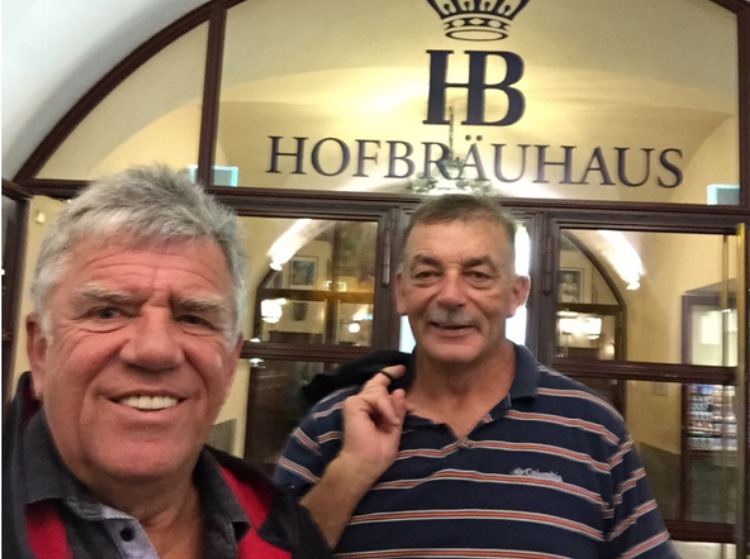 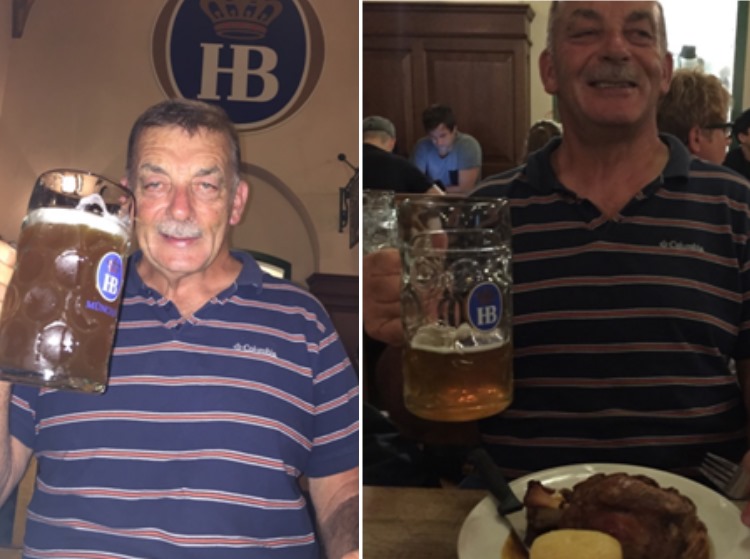 ..with the third round of beers and good food….