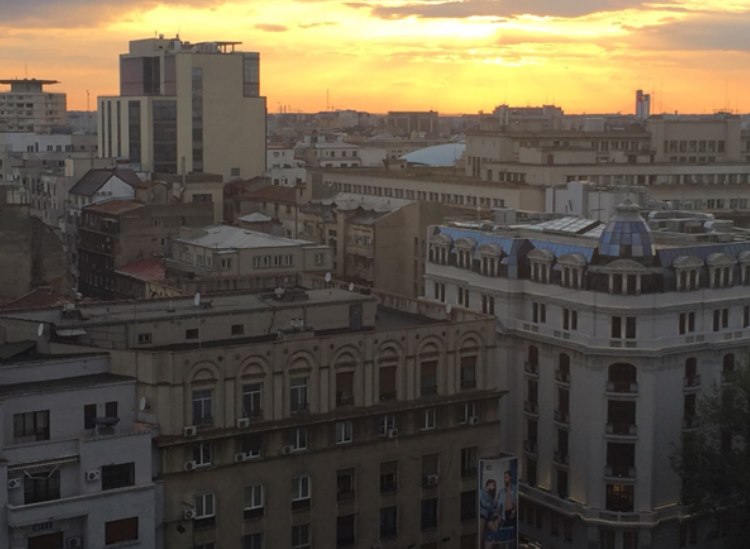 Having slept a night in Bucharest the first task of the Day (4the August) was to find a repair shop in order to replace Lipstick’s manifold gasket.

Bucharest is the capital and largest city of Romania, as well as its cultural, industrial, and financial center.

It is located in the southeast of the country, on the banks of the Dâmbovița River, less than 60 km (37.3 mi) north of the Danube River and the Bulgarian border.

Bucharest was first mentioned in documents in 1459. It became the capital of Romania in 1862 and is the center of Romanian media, culture, and art.

The biggest Toyota dealer in Bucharest was identified and the boys navigated through the town to find the place.

Unfortunately, they were told again that they could not be accommodated for any repair work as the service station is fully booked out for today and tomorrow.

So, plan B was activated meaning that the approach would now be towards an exhaust replacement firm and after a bit of “googling” a place was identified and found.

An exhaust fitment centre in Bucharest…

Nadir Dury Nadir – the owner of the place- was extremely helpful and told the boys that another a car in the dock would soon be finished and that they could then attend to look at Lipsticks manifold problem.

Nadir guided the boys to a small restaurant next to the workshop where they could sit in comfort and have some refreshments whilst waiting and a short while later Lipstick was driven into the workshop and the mechanics started their work. 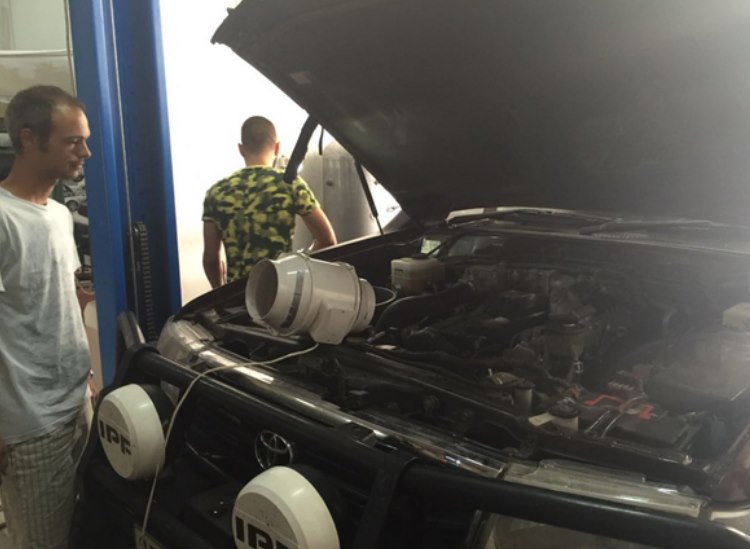 Some 30 minutes later however Nadir advised the boys that in order to get rid of the broken bolt they would need to take the cylinder head off and machine the the holes so to remove the broken bolt and possibly other bolts which need to be removed and could also shear off.

This of course would take another day going into Friday afternoon and after a bit of brainstorming and risk evaluation it was decided to reassemble everything and drive on to Budapest the next Day.

Nadir was very sorry that he could not help the team and even settled the restaurant bill on top of refusing any payment for work done.

Thank you very much again Nadir.

With a hole afternoon on hand the Andre and Willy decided to go sightseeing in Bucharest andidentified the Palace of Parliament as a good place to see and visit.

After the earthquake of 4 March 1977, NicolaiCeausescu– the then dictator of Romania –  started a reconstruction plan of Bucharest, and the People’s House was the center of this project.

The so-called Project Bucharest was an ambitious project of Ceausescu spouses and began in 1978, as a replica of Pyongyang, the North Korean capital.

Between 20,000 and 100,000 workers, sometimes even in three shifts worked on the construction site and thousands of people died at the People’s House, some mention a figure of 3,000 people

The building has eight underground levels, the last one being an antiatomic bunker, linked to the main state institutions by 20 km of catacombs.[18]NicolaiCeausescu feared a nuclear war.

The building has a developed area of 365,000 m2, being the world’s second largest administrative building, after The Pentagon.

NicolaiCeausescu(January 1918[– 25 December 1989) was a RomanianCommunist); politician. He was General Secretary of the Romanian Communist Party from 1965 to 1989, and as such was the country’s second and last Communist leader. He was also the country’s head of state from 1967 to 1989.

His secret police, the Securitate, was one of the most ubiquitous and brutal secret police forces in the world.

On 25 December the couple were hastily tried and convicted by a special military tribunal on charges of genocide and sabotage of the Romanian economy in an approximately one-hour long court session.[5]Ceausescu and his wife were then shot by a firing squad.

Marble and granite wherever one looks… 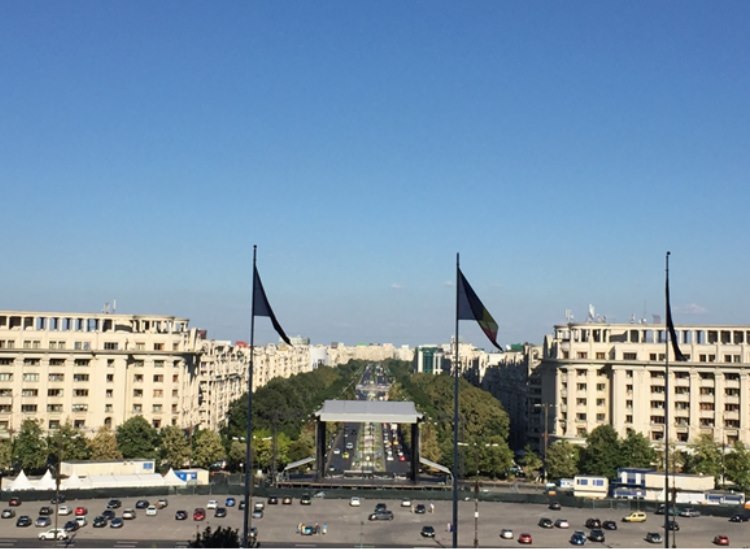 View from the balcony of the palace. 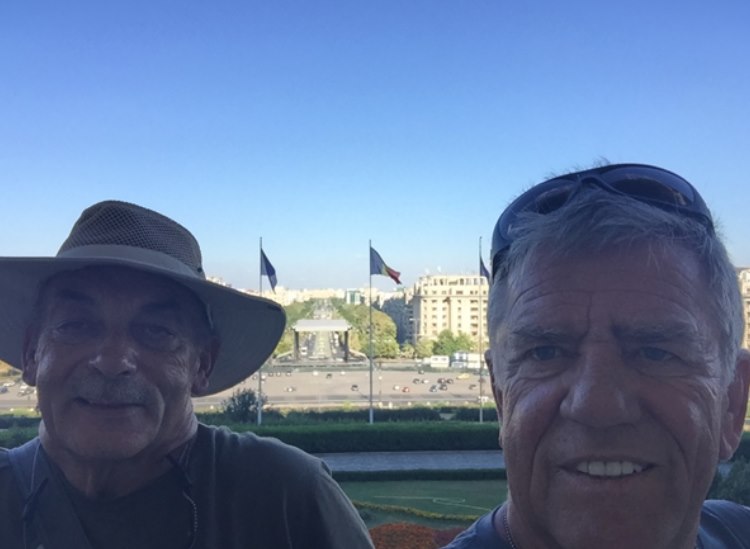 The evening was spent in one of many restaurants in Bucharest’s downtown area where wonderful food was on offer. 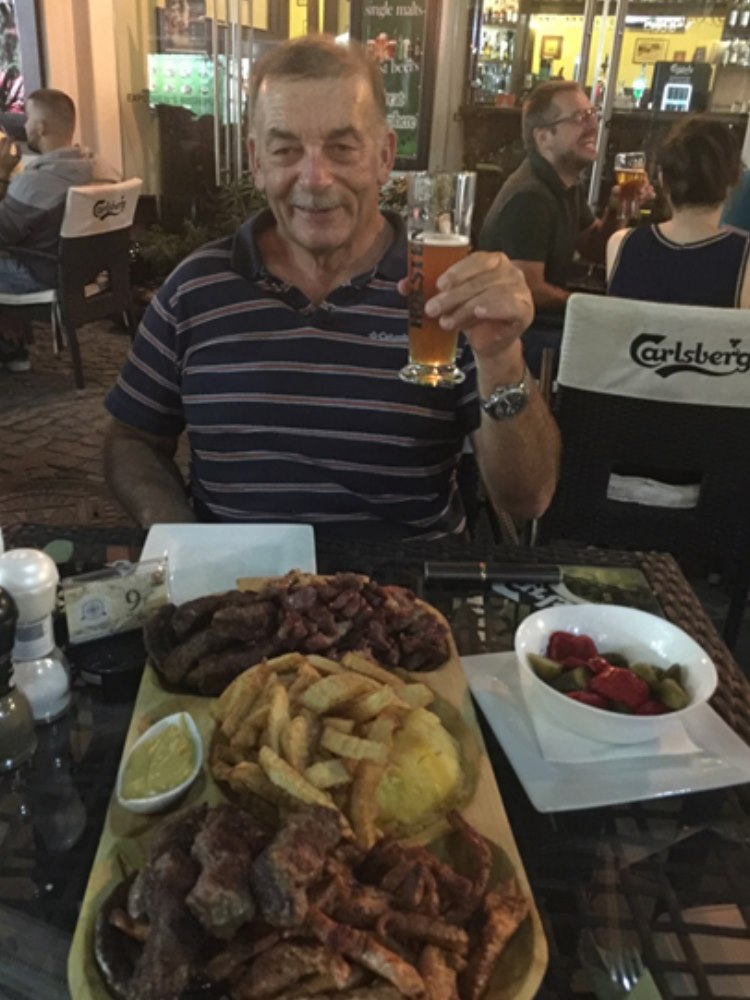