After a great evening with Theresa and Chris the boys continued their journey towards Saskatoon in a north westerly direction.

This stretch of Canada can be described as the “breadbasket” of this huge country because for the next few hundred kilometres both sides of the road were covered with wheat farms. 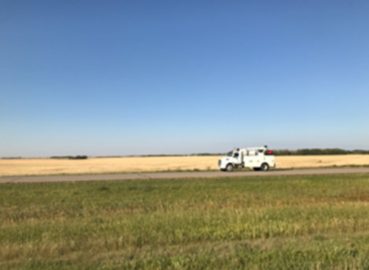 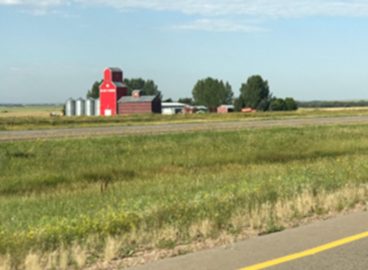 This and lots of agricultural equipment outlets in the smaller towns seem to be the backbone industry of this region.

At a stop due to road construction Team Lipstick spoke to one of the road workers and were told that this part of the world is pretty much “snowed under from early October until middle of May.

He described that last winter the snow was higher than his garage door and he could not get to his vehicle for days and only after heavy bulldozing of the snow granted him some excess.

All live from farming around this area and some extra income is generated when some temporary work such as the current road construction is taking place. The farmers basically have from June to October to harvest and distribute their crop which is mainly done though CO Ops with their huge silos which can be seen every few kilometres along the road.

Andre and Willy can only just imagine of how it would look around here for 6 months of the year with short daylight days and snow all over – Viva South Africa!

Team Lipstick loves the motels along the route and found another one in Saskatoon. These places are especially nice because one can park the vehicle basically a meter away from the bedroom door which makes it easy to load and unload luggage and other staff.

It however is suggested that one should park the vehicle with the front to the door and not with the back end facing the bedroom. When Andre started the engine this evening to check the battery charging system the bedroom became a gas chamber and the smoke alarm detector went off due to lack of oxygen available. The boys were ducking and expected Canadian fire brigade to come down on them but after about 5 minutes the alarm reset itself and the siren stopped…