As Lipstick was parked in another “danger zone” it needed to be moved to a ore secure side and after lotsof negotiations with the hotels staff Tem Lipstick was offered to use parking which normally is reserved for their staff only.

Lipstick was then quickly moved and the boys were relieved that they are not at risk being clamped up again as in Budapest.

Nice breakfast was had at a café right on Wenceslas Square in the centre of town..

Wenceslas Square is one of the main city squares and the centre of the business and cultural communities in the New Town of Prague, Czech Republic. Many historical events occurred there, and it is a traditional setting for demonstrations, celebrations, and other public gatherings. The square is named after Saint Wenceslas, the patron saint of Bohemia. It is part of the historic centre of Prague, a World Heritage Site

Before going on a walking tour the boys decided to do some shopping and the many shopping malls in Prague were ideal to replenish some lost of worn out t-shirts and shorts. Supermarkets offered traditional Czech specialities for the final stock up of Lipstick’s fridge.

The goal of the day was to cross the famous “Karl’s bridge and visit the mountain where the famous castle is overlooking Prague.

Prague Castle is a castle complex in Prague, Czech Republic, dating from the 9th century and the official residence of the President of the Czech Republic.

The castle was a seat of power for kings of Bohemia, Holy Roman emperors, and presidents of Czechoslovakia. The Bohemian Crown Jewels are kept within a hidden room inside it.

According to the Guinness Book of Records, Prague Castle is the largest ancient castle in the world, occupying an area of almost 70,000 m2, at about 570 meters in length and an average of about 130 meters wide. 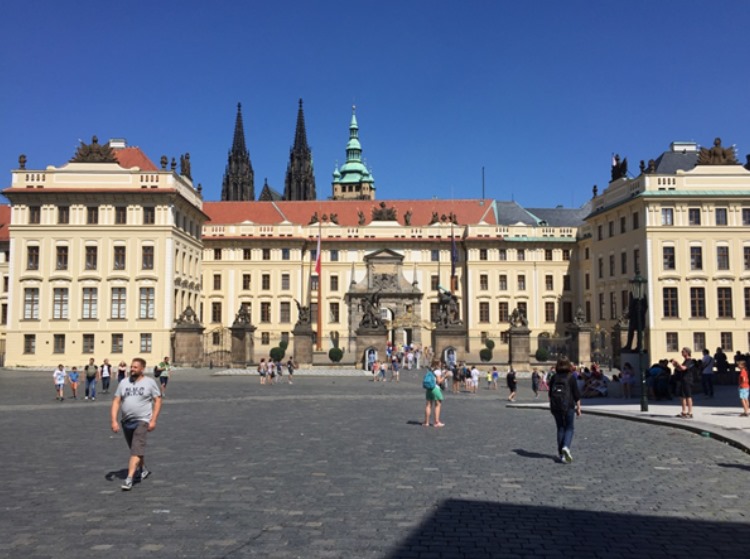 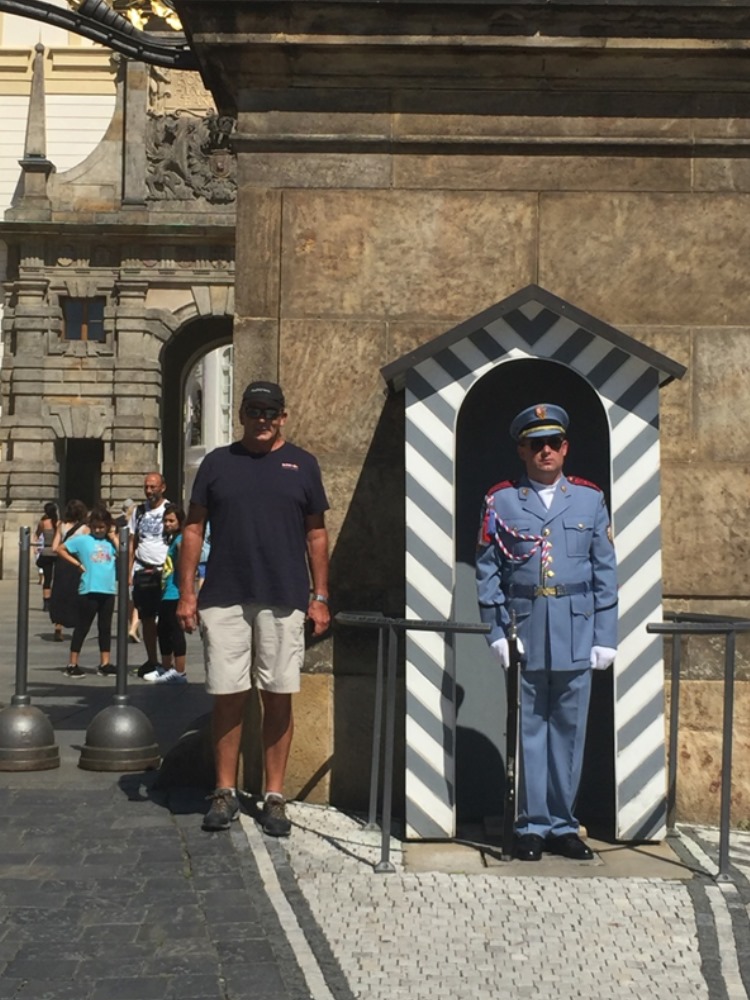 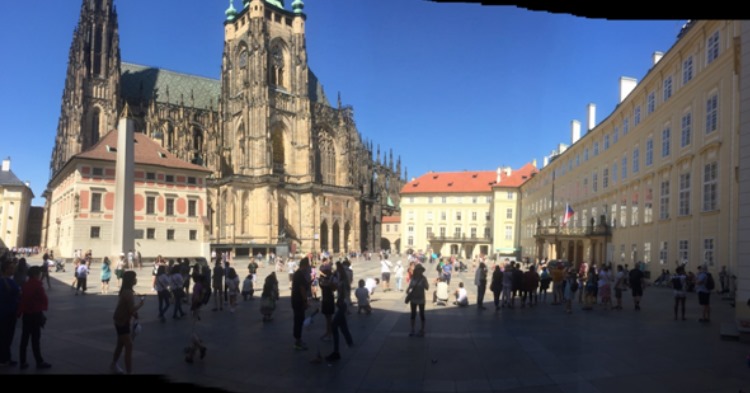 The current cathedral is the third of a series of religious buildings at the site, all dedicated to St. Vitus. The first church was an early Romanesquerotunda founded by Wenceslaus I, Duke of Bohemia in 930.

This patron saint was chosen because Wenceslaus had acquired a holy relic – the arm of St. Vitus – from Emperor Henry I. It is also possible that Wenceslaus, wanting to convert his subjects to Christianity more easily, chose a saint whose name (sounds very much like the name of Slavic solar deity Svantevit.

The architecture and love of detail in the structures as well as the size of these ancient buildings are really phenomenal and cannot be compared to the ancient sites in China which are different in size nature and individual architecture.

Walking inside the cathedral simply takes one’s breath away and Team Lipstick’s mind was wondering about how the construction of these massive building were taken place in the absence of cranes ,modern scaffolding and the logistics involved.

Often these buildings were completed over many decades and the fact that they are still standing proud some 1000 years later bears testimony of the skills involved in constructing them. 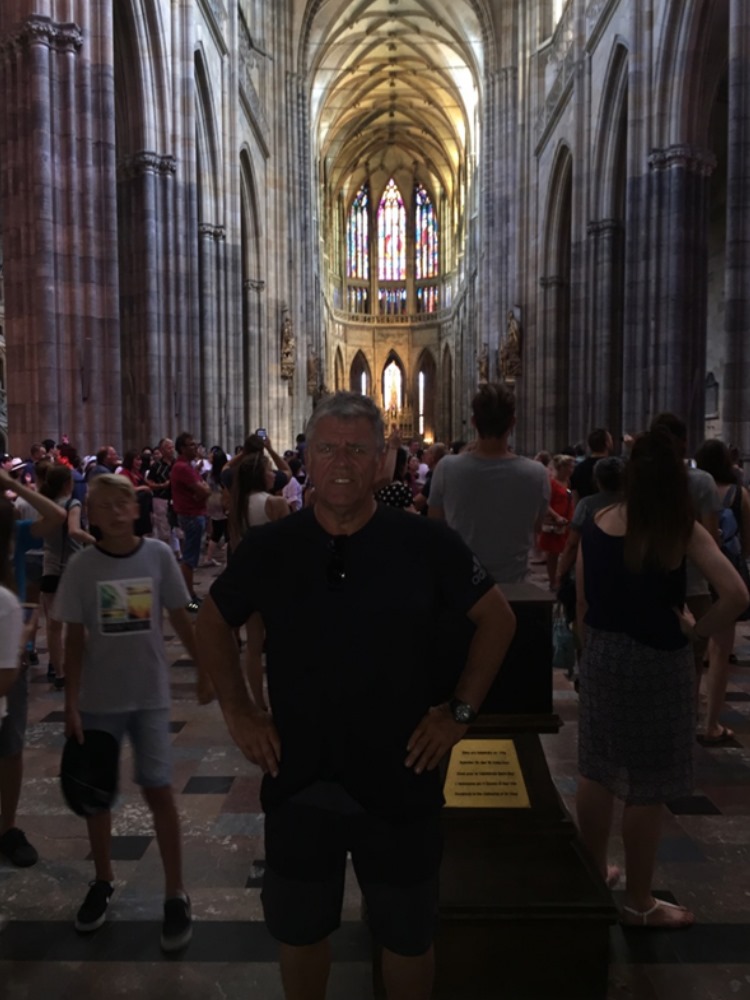 Willy admires the inside of the cathedral and the vision of the men who decided to built this monument inPrague.

From the mountain where the palace of the cathedral and the castle is situated one has a beautifull view over the City of Prague and the long walk down the mountain through cobble stoned walkways and many many steps was another interesting moment on the trip long the silk road. 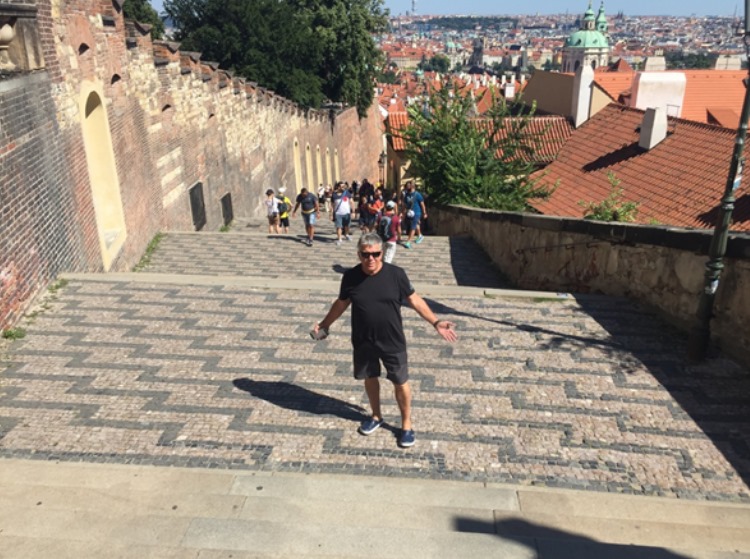 Countless steps down from the mountain reminded the boys of the gym back home whilst walking through a lot of history…before reaching the Danube again which flows through thiwonderfull part of the world. 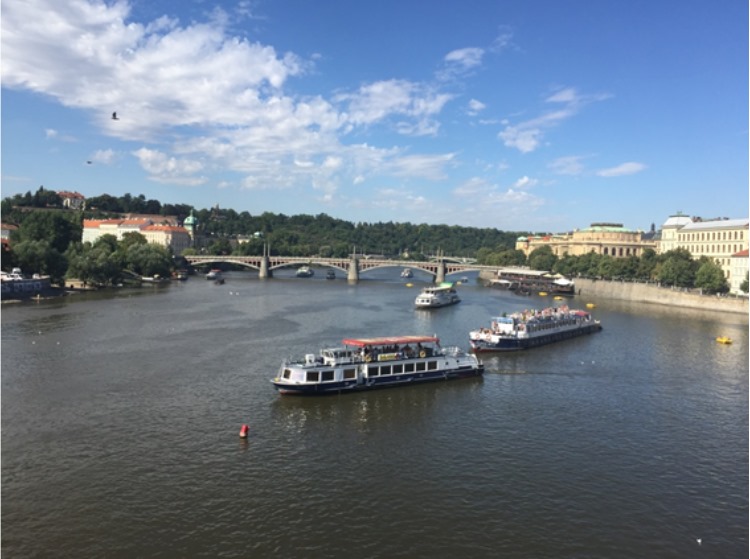 The Danube river in Prague with its many cruise boats.

At the end of this fantastic day in ragueanice restaurant was found where the boys did not have to worry about language problems and could enjoy another taste of great Czech food. 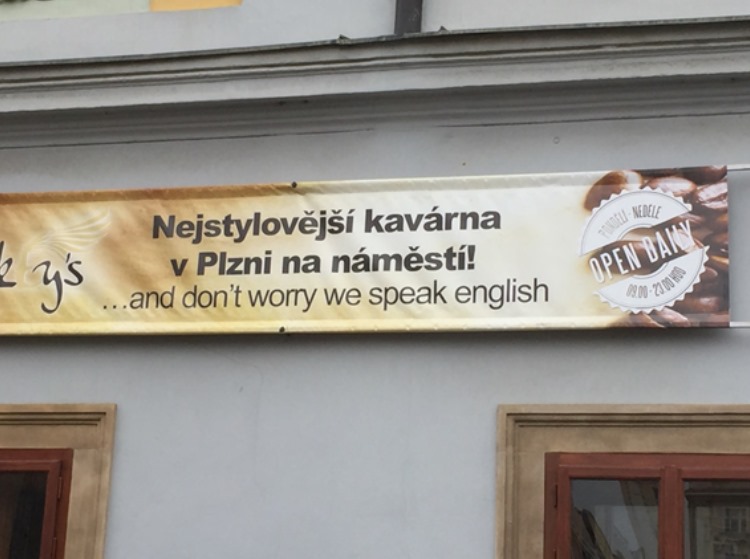