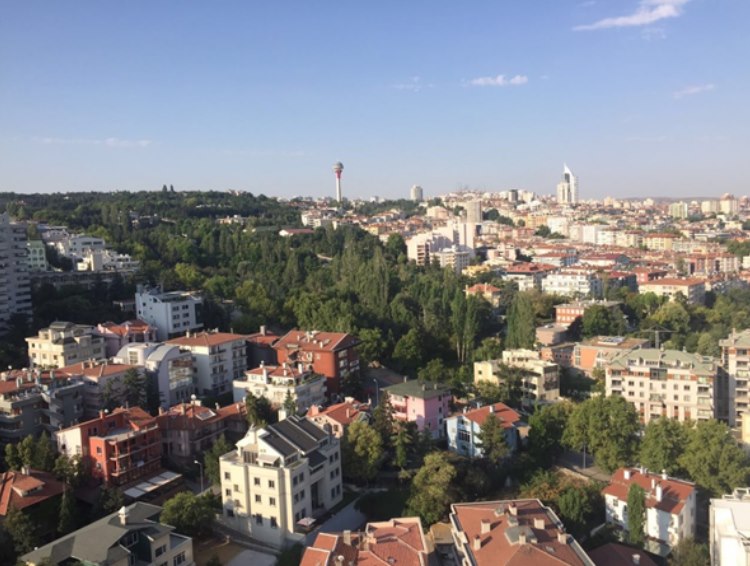 The older part of Ankara is not very car friendly as too much traffic is trying to get through the narrow roads up and down on lots of hills – again the Sygic app on the iPhone was a bigger help than the Garmin navigation systems and it took Lipstick just more than half an hour to reach the outskirts of Ankara with newer buildings and wide triple lane highways leading out of this capital city.

left and right through narrow roads… 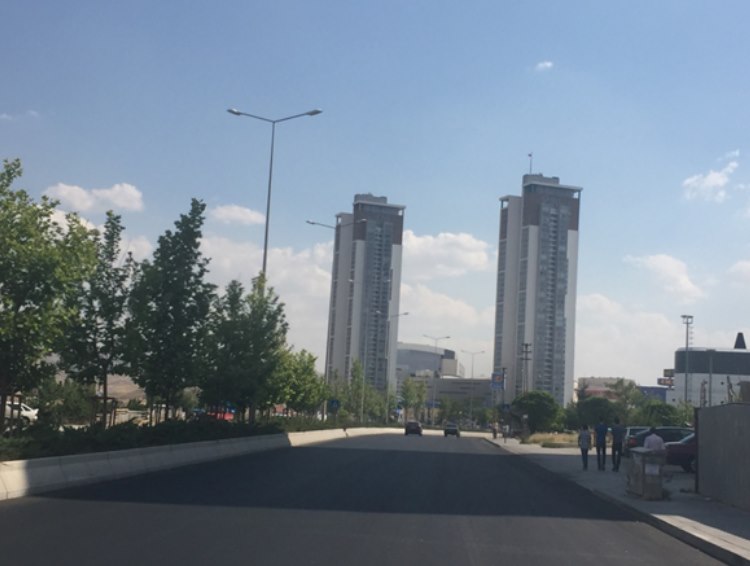 .. modern buildings and wide roads driving south out of Ankara.

The highway leading south was in great condition for at least half the distance and again a lot of agriculture could be seen with smaller cities in-between. 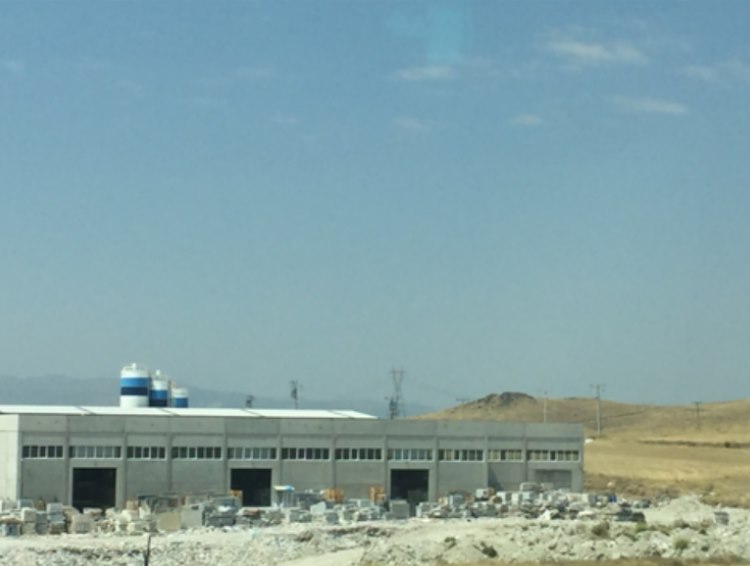 Besides agriculture it became soon evident that Lipstick is passing through the heartland of Turkey’s granite and marble factories with in some cases more than 30 factories behind each other showing the most beautiful granite, travertine and marble tiles to the passing cars. 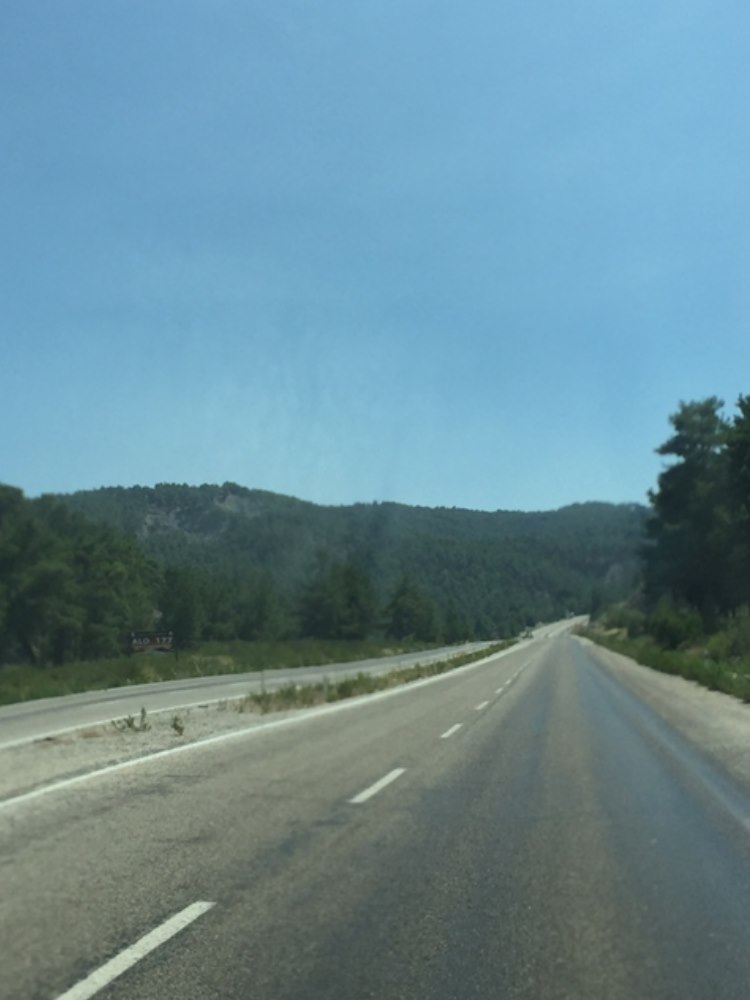 Some 200 km before reaching the coast the boys had to cross many mountains covered with forests similar to the black forest area in Germany and after crossing the last mountain and to the excitement of team Lipstick the first glimpse of the Mediterranean could be seen …. 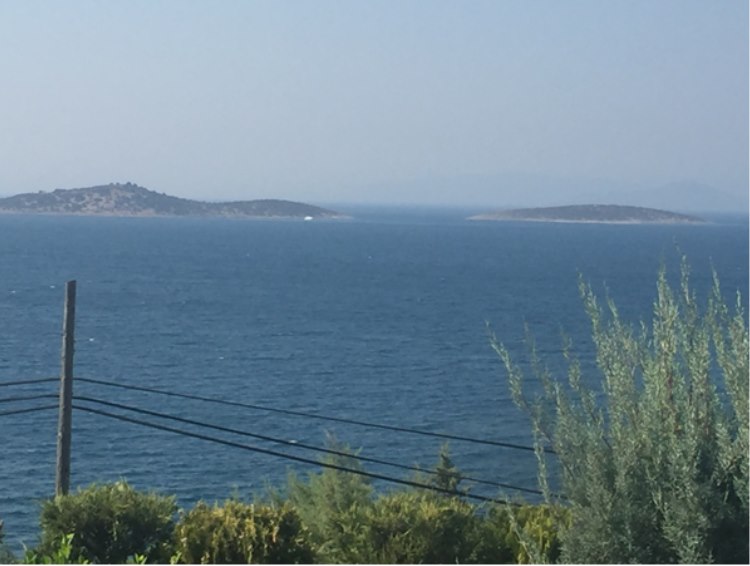 The Mediterranean Sea on the coats close to Bodrum

Bodrum is a district and a port city in Muglia Province, in the southwestern Aegean Region of Turkey. It is located on the southern coast of Bodrum Peninsula, at a point that checks the entry into the Gulf of Golva, and is also the center of the eponymous district. The city was called Halicarnassus of Caria in ancient times and was famous for housing the Mausoleum of Mausolus, one of the Seven Wonders of the Ancient World. Bodrum Castle, built by the Knights Hospitaller in the 15th century, overlooks the harbor and the marina.

Bodrum is the site of the ancient city of Halicarnassus, the location of the famous Mausoleum of Halicarnassus (built after 353 BCE) – one of the Seven Wonders of the Ancient World. Unfortunately, the ancient monument was destroyed by earthquakes in the Middle Ages – some of the remnants can be seen in London’s British Museum.

On arrival in Bodrum the boys were told by some locals that Bodrum in Turkey is regarded as the St. Tropez of the middle east. with its main activity being all tourism related. Team Lipstick was thrilled as they had planned anyhow to stay over here for 2 nights and enjoy the Mediterranean scenery.
So after a good night’s rest Andre and Willy decided to explore this beautiful coastal town and their first goal was to visit the castle down at the old harbour side.

old file picture of the castle of Bodrum…

The Castle of St. Peter the Liberator of the Order of the Knights of the Hospital of St. John of Rhodes – to give it its full, comprehensive title – is Bodrum’s acclaimed landmark. Over the period of six centuries it has served as a military garrison, a compound enclosing a tiny village, and even as a fortress prison. Today it houses one of the finest museums of nautical archaeology in the world.

Additionally, the very uneven steps many of them worn out through the many centuries required some good maneuvering and they were felt in the calf muscles of team Lipstick still on the next day. 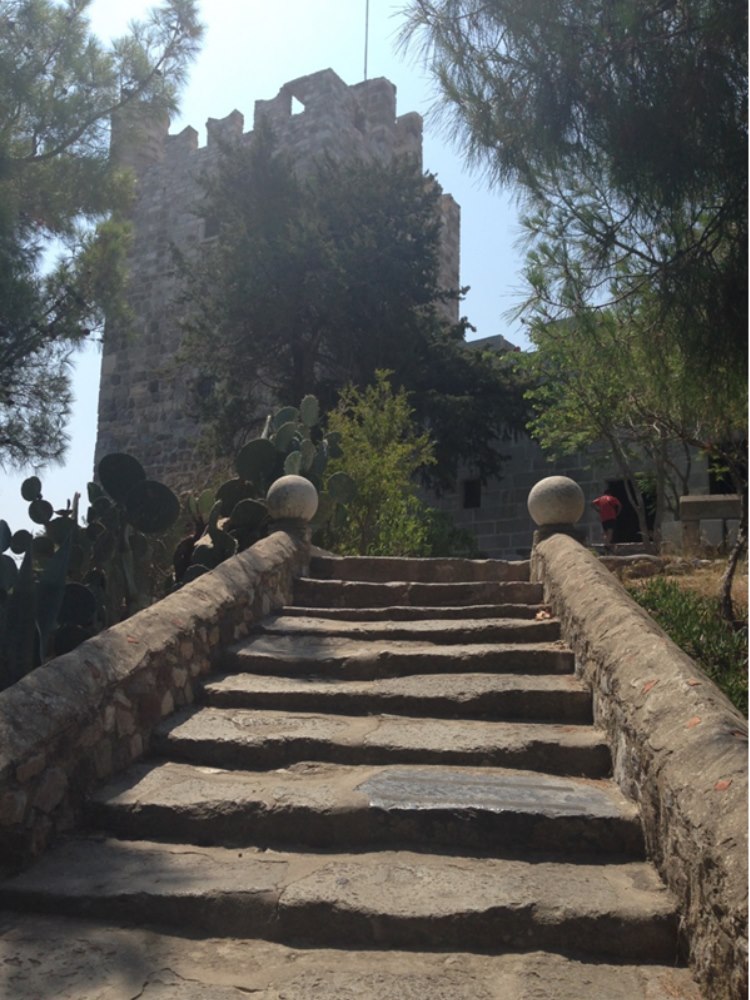 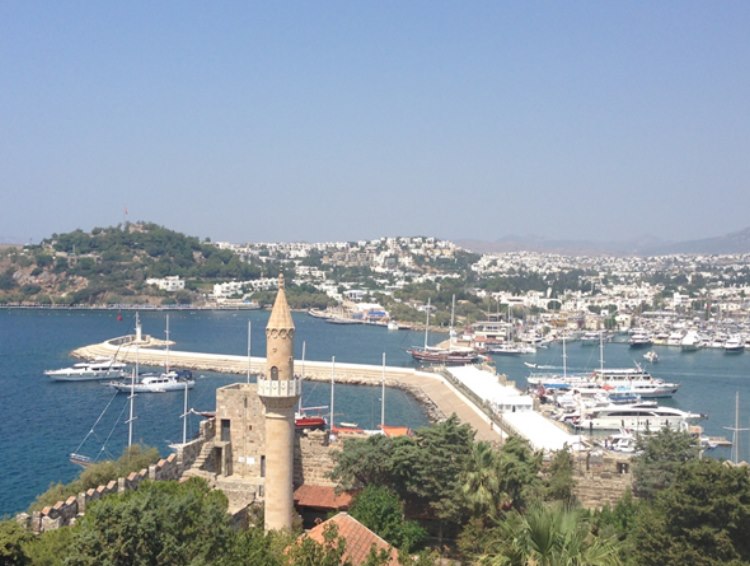 View from the top of the castle overlooking Bodrum and the many boats in the harbour. 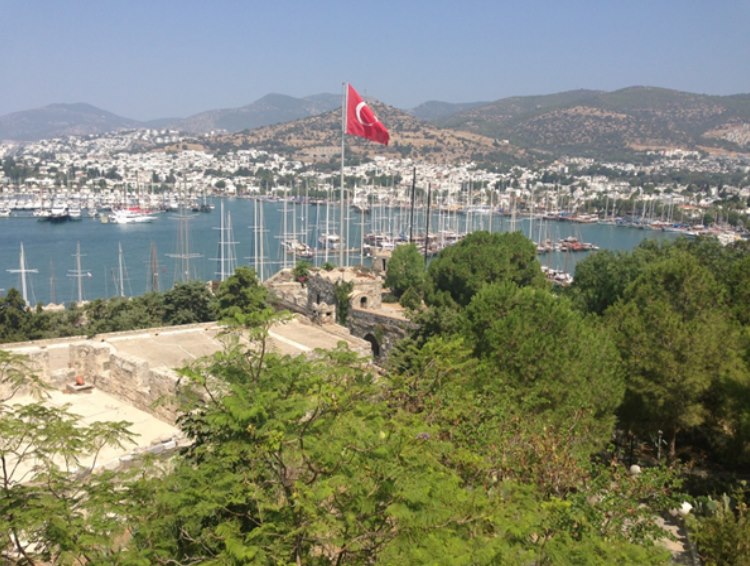 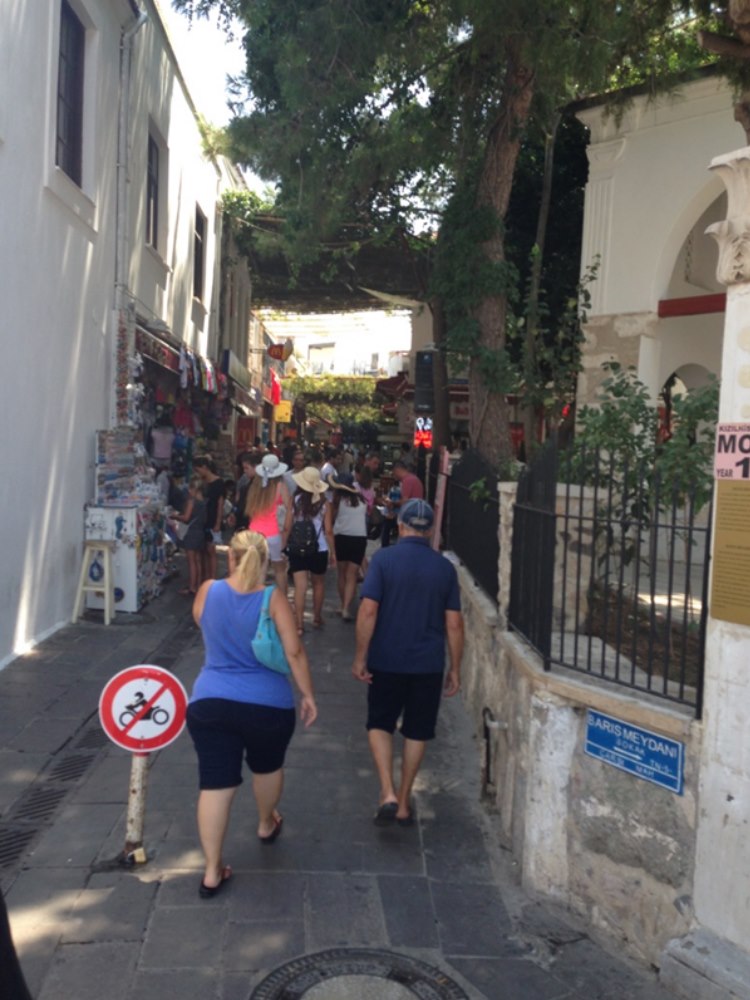 Naturally the boys contributed to the well being of some shop owners and bought some goods after heavy bargaining…
Overall team Lipstick was highly impressed with this town and decided to have Dinner later close to the harbour in the many restaurants which are situated. 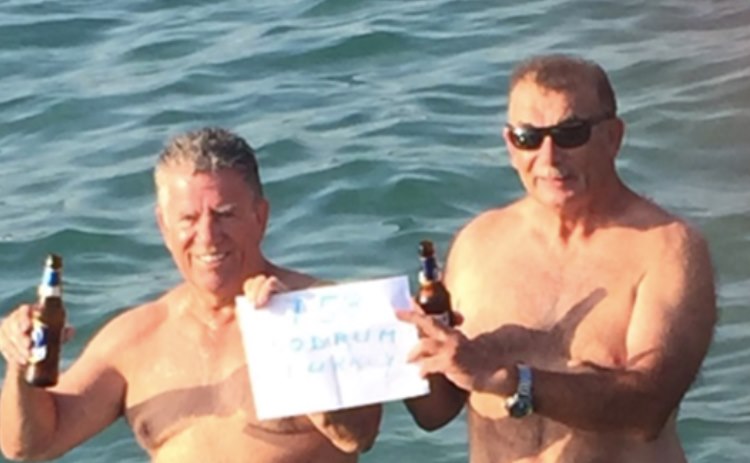 So after a nice refreshing swim in the sea and the consumption of a bit of local beer in celebrating T58 day it was decided to drive back to the harbour front.

With heavy traffic on the Friday evening the boys realised that it would be extremely difficult to find a parking space for Lipstick close to the harbour but they found a gap on the road coming in and parked with many cars doing likewise behind them and in front of them.

After a nice walk again through the many bazaar shops they found a beautiful restaurant on the edge of the sea and right underneath the famous castle. 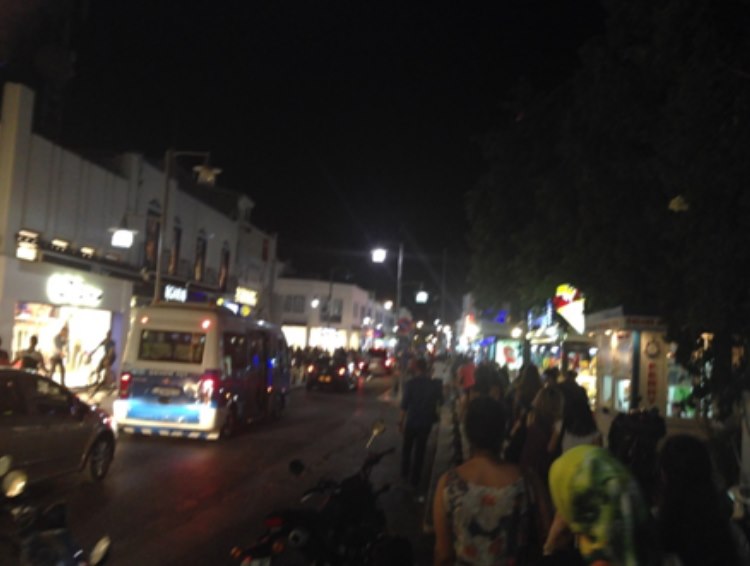 Busy night market on the way to the harbour front in Bodrum…. 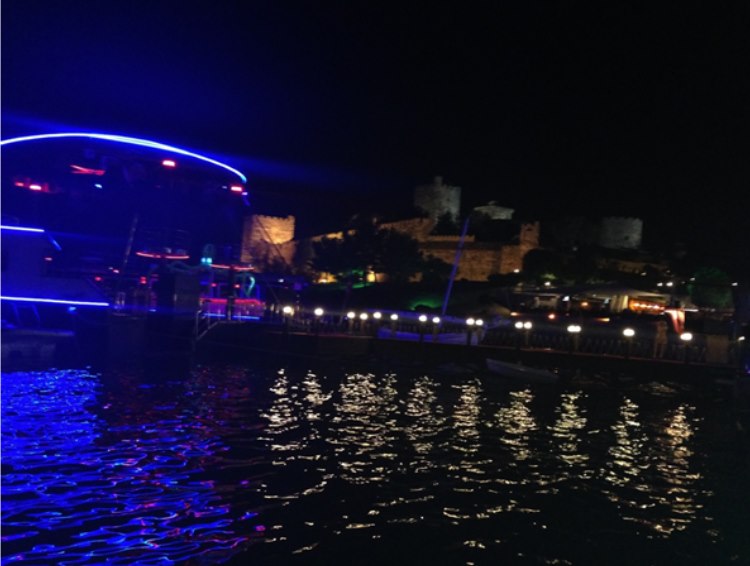 … and a beautiful view of the castle lit up from the restaurantsterrace.

After a great meal with adequate liquid refreshments it was decided to call it a day and head back to the hotel and a “loop dop” but on arrival in the street where Lipstick was parked it was discovered that LIPSTICK WAS GONE!!

Besides not seeing Lipstick the boys also saw no other car previously being parked behind and in front of Lipstick and soon realised that a huge police tow away must have been taken place.

The police requested passport documents which the boys did not have and after many gesticulations it became clear that Lipstick was towed to the police car park like any other vehicle occupying this seemingly sacred piece of street.

The boys watched one of the other car owners being given a ticket when one of the police officers called them and guided them to a close by taxi and told the taxi driver obviously where to take the two devasted team members…
Some 10 km later – but fortunately in direction of team Lipsticks hotel- they arrived at a car park with dozens of cars being impounded.

The taxi driver after having been paid by the boys seemingly explained to the car park’s management what the policemen had told him and the boys were guided to an office and requested to part with 150 Turkish Liras in payment for the tow away truck and the storage fee.

Happily paying what was requested the boys were then guided to where Lipstick was parked and were free to drive away.

No fine needed to be paid obviously showing great friendliness to tourists in general and team Lipstick especially.