As the Garmins picked nothing up in detail team Lipstick downloaded Sygic a great navigation system which works on the cell phones. It was therefor no problem in getting out of Tehran and onto the highway up north towards Turkey.
Out of town Lipstick saw itself driving through desert like surroundings with a mountain range on the right.

Indeed, the guy looked like a senior pilot in his dark blue uniform and 4 stripes at the arm.

“I am sure that guy must speak English” said Andre and approached the man.
“hello do you speak English” the guy shook his head and Andre mentioned to
Willy that he must be flying for a local airline maybe for Azerbeidschan. 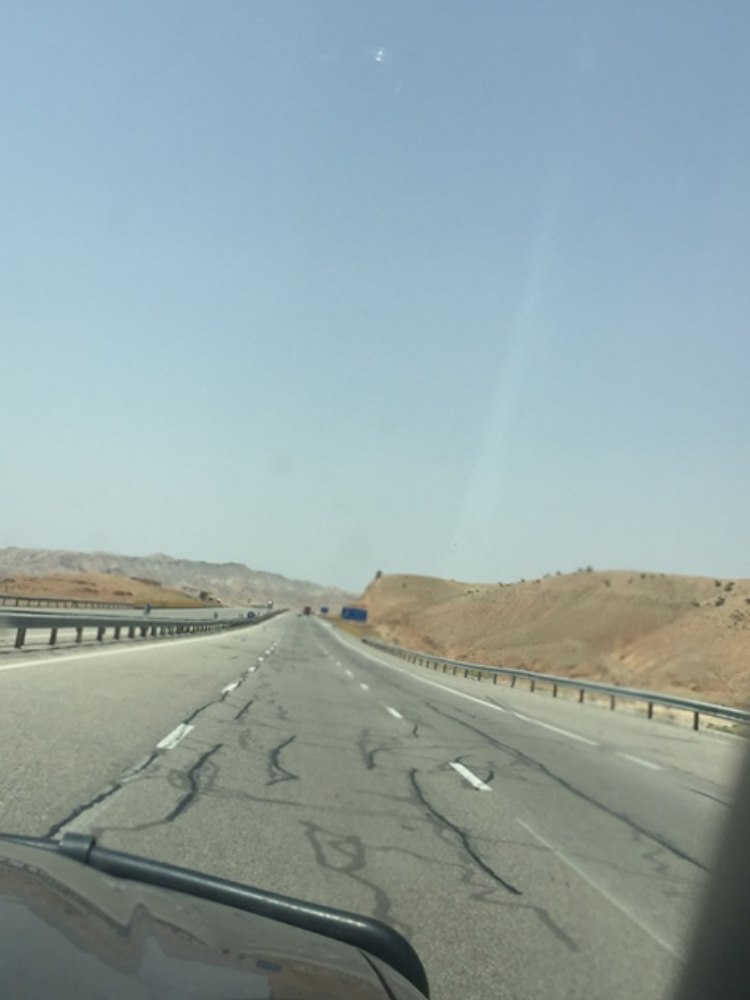 To the big surprise and the cause for much laughter the very same pilot offered to carry the guy’s suitcases to their room – he was the bellboy of the hotel. 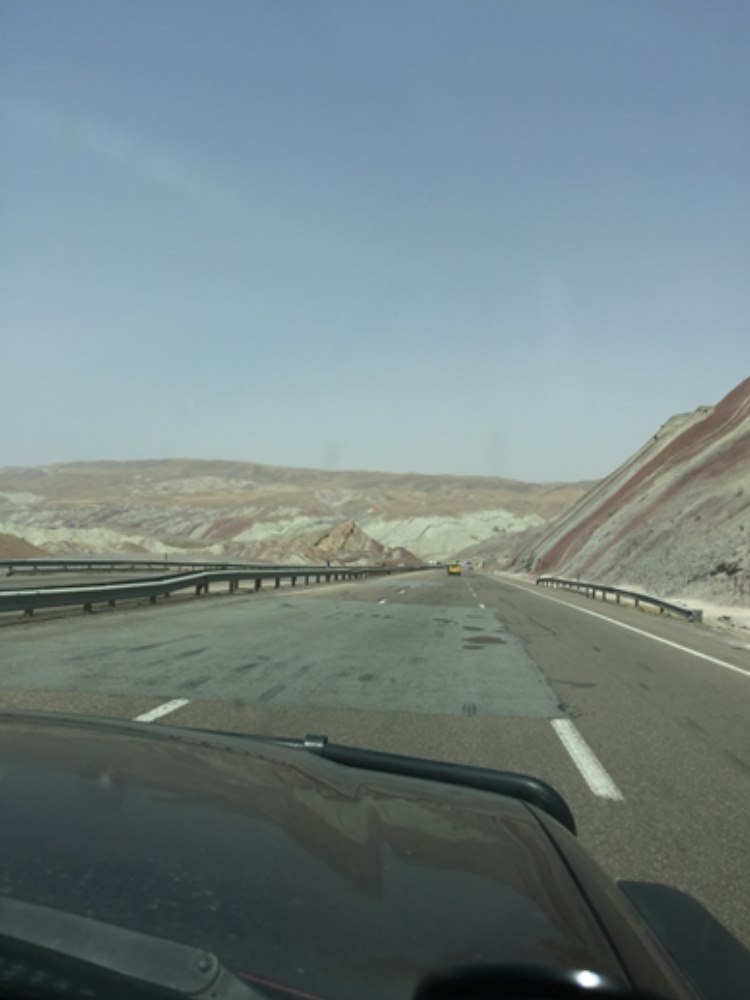 Tabriz is the most populated city in the Iranian Azerbaijan,[3] one of the historical capitals of Iran, and the present capital of East Azerbaijan Province. Located in the Quru River valley between the long ridge of the volcanic cones of the Sahand and Eynali mountains, Tabriz’ elevation range between 1,350 and 1,600 meters above sea level. The valley opens up into a plain that gently slopes down to the eastern shores of Lake Urmia, 60 kilometers to the west.

With cold winters and temperate summers, the city is considered a summer resort. Tabriz is the World Carpet and Crafts City.

The final goal of the day was to get to the border town of Bazargan and either sleep over there or take a chance and cross into Iran if the border would be open 24 hours.

Bazarganis a city in and the capital of Bazargan District, in Maku County, West Azerbaijan Province, Iran. It is the most important Iranian ground border for importing and exporting.

On arriving at the customs control post the boys were approached by a “fixer” who offered his services to assist with border formalities and having had a good experience with a “fixer “when entering Iran, the boys were happy to accept his service.

With Diesel costing only about 3 Rand in Iran it was decided to fill Lipstick up and use the Iranian currency still on hand. The Fixer guided the boys to a garage about 1km back from the border and the boys requested 60l of Diesel which was quickly pumped into Lipstick.

Back to the border and on entering the gates Lipstick was stopped by a police officer who wanted to see passport and check the car. The official took a liking to a flick knife in the side pockets of the door and tried to convince Willy that this would be a nice gift for him. Willy however resisted and told the officer in no uncertain way that this would be too dangerous for the man and that it will remain in Willy’s possession for good.

Whilst the man was still trying to negotiated all of a sudden the idling engine of Lipstick stopped!! Why, what how?

Three attempts to start the car again were unsuccessful and in no time team Lipstick realized that this is a fuel problem which can only be caused by dirty Diesel or – worse –that the petrol attendant pumped petrol in the car instead of Diesel.

Within minutes Lipstick was surrounded by taxi operators each giving their best advice in Persian language and gesticulating that the fuel needs to be sucked out of the car.

Team Lipstick gave them a hose pipe and green light to proceed whereupon the chief Taxi sucker successfully got the flow going and the other taxi operators were storming away and back producing one-liter plastic bottle and 3 l oil canisters to harvest whatever can be sucked out.

Some 20l into this game the flow stopped and the chief sucker quickly produced a shifting spanner wanting to open the drainage bolt at the bottom of Lipstick’s main fuel tank.

Shifting spanner on Lipstick – no ways! With the current problem as is the boys did not want to risk a damaged bolt which can maybe not replaced.

It was decided that one should search for a bush mechanic and within 10 minutes a guy arrived who mentioned that his cousin is a Diesel mechanic and his nephew would have a car suitable to pull Lipstick back to town in order to drain the fuel system.

With no other option on hand team Lipstick agreed that this would be the best option and they were pulled back to a roadside workshop in the middle of Bazargan village and for those readers who never experienced a problem like this here is the sequence to follow in order to rectify the problem.

1) Get a proper ratchet with the right size nut
2) Organize a tray and spare canisters
3) Unscrew the drainage bolt underneath the main tank
4) Let the petrol out into the tray
5) Screw the nut beck in when tray is almost full
6) Empty tray into spare canisters
7) Proceed with step 3-6 until flow of petrol stops
8) Take of spare wheel to get access to extra tank and check whether there is any fuel left in that tank
9) Put back 10l of Diesel from Lipsticks spare tank
10) Unscrew drainage bolt and check whether 10 l come out
11) If 10of diesel l drain out than most probable tank is fairly empty
12) Now use compressed air to blow into the tank to force the last bit of petrol fume out of the tanks through the drainage holes
13) Now unscrew fuel filters under the bonnet and empty them
14) Blow dry the filters with compressed air and fill them up with Diesel
15) Reattach the filters and use compressed air to blow the diesel in the filters back into the tanks and out the drainage hole.
16) Refill the filters with diesel.
17) Loosen the injection pipes supplying Diesel to the engine
18) Fill up the car with Diesel until its full – if you can put in the maximum amount of Diesel (150l in Lipstick’s case) than you know that the tanks were empty.
19) Now start the car for 20 seconds which will push Diesel though the detached injection pipes and the pistons will push out and drop of petrol or petrol fume left in the combustion chambers
20) Now screw the injection pipes back to the engine and start the car again for 20 seconds.
21) After switch off let the engine rest for 10 minutes to settle any air bubbles in the fuel supply system
22) After 10 minutes start the car and let it idle for 5 minutes
23) Switch off thereafter and wait another 10 minutes
24) Now start the car and go for a test drive trying to reach top speed.

If step 24 is completed successfully your problem is solved….and here some pictures of operation “Fuel problems” 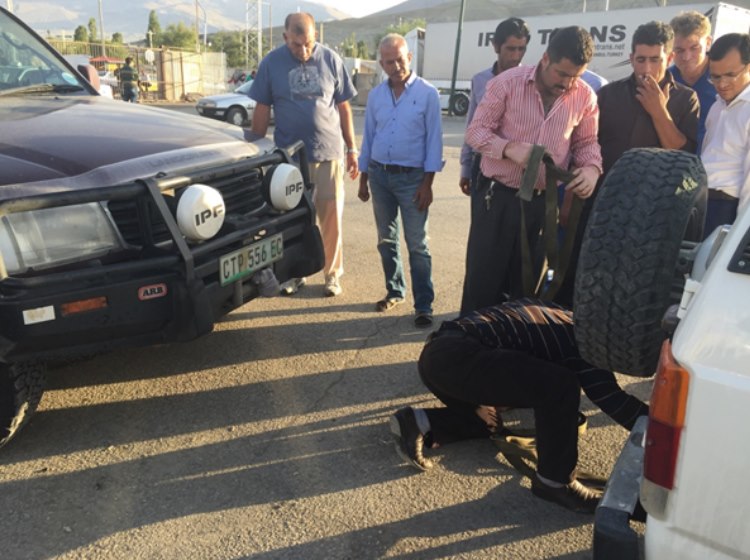 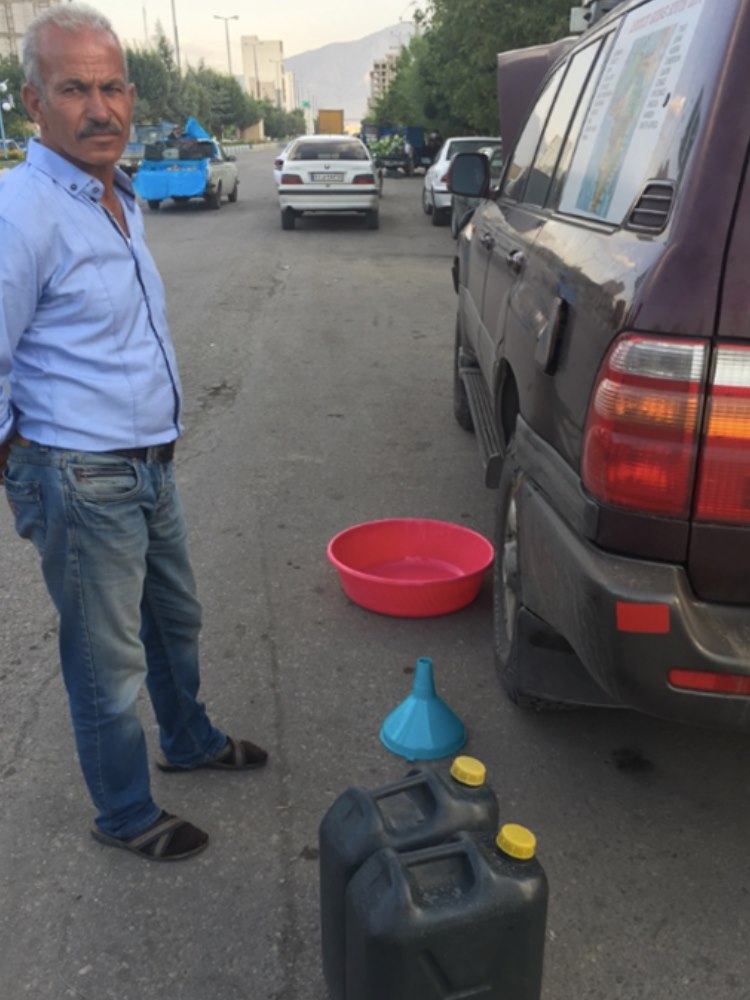 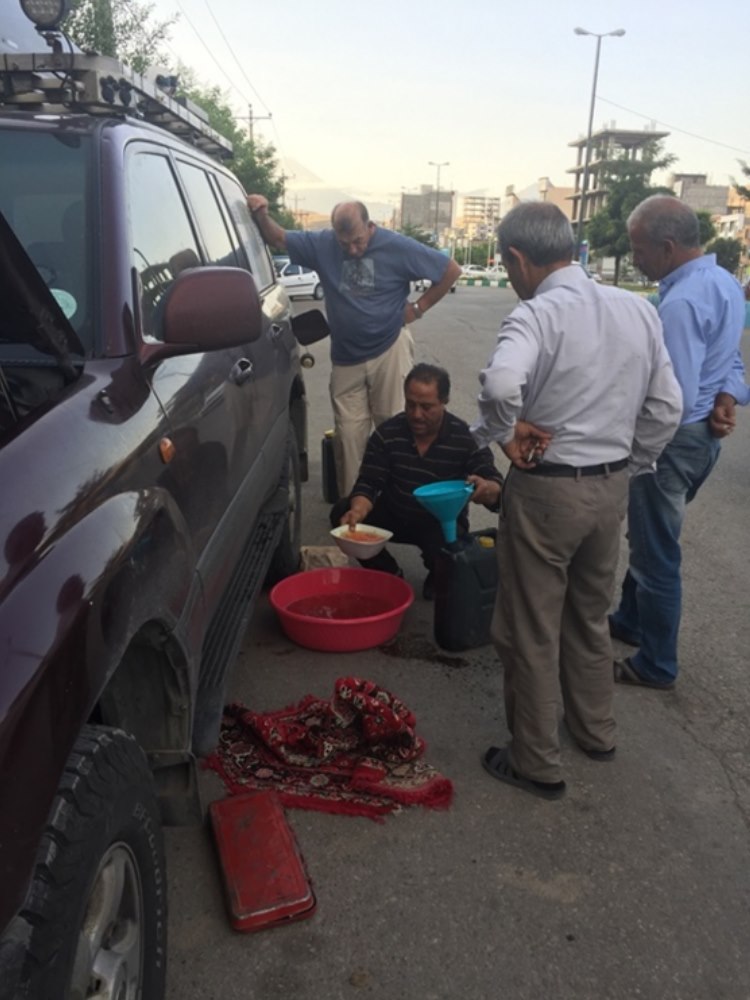 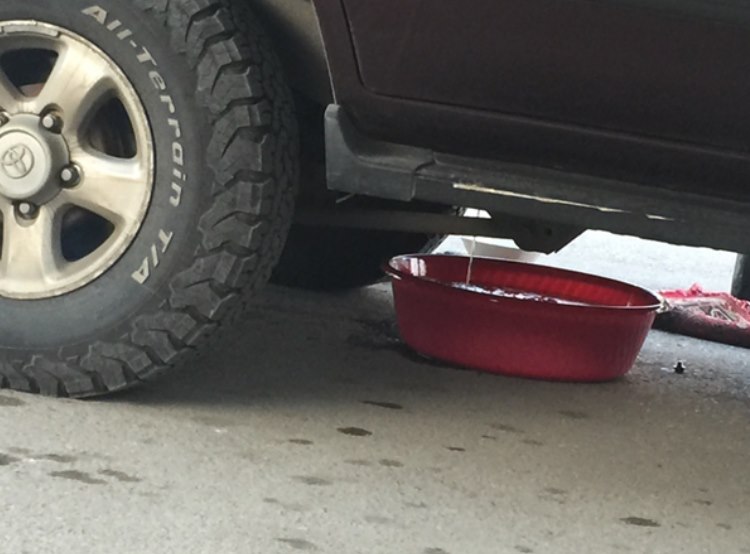 After opening drainage bold let the fuel drip into Tray

from tray to canisters… 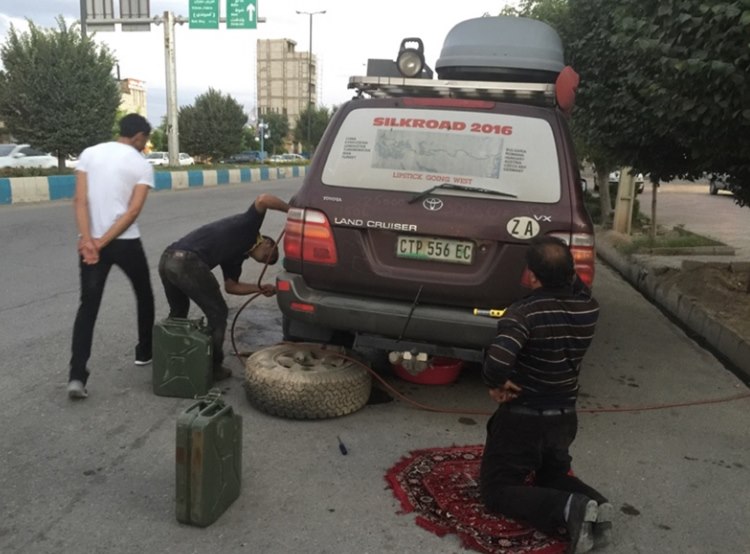 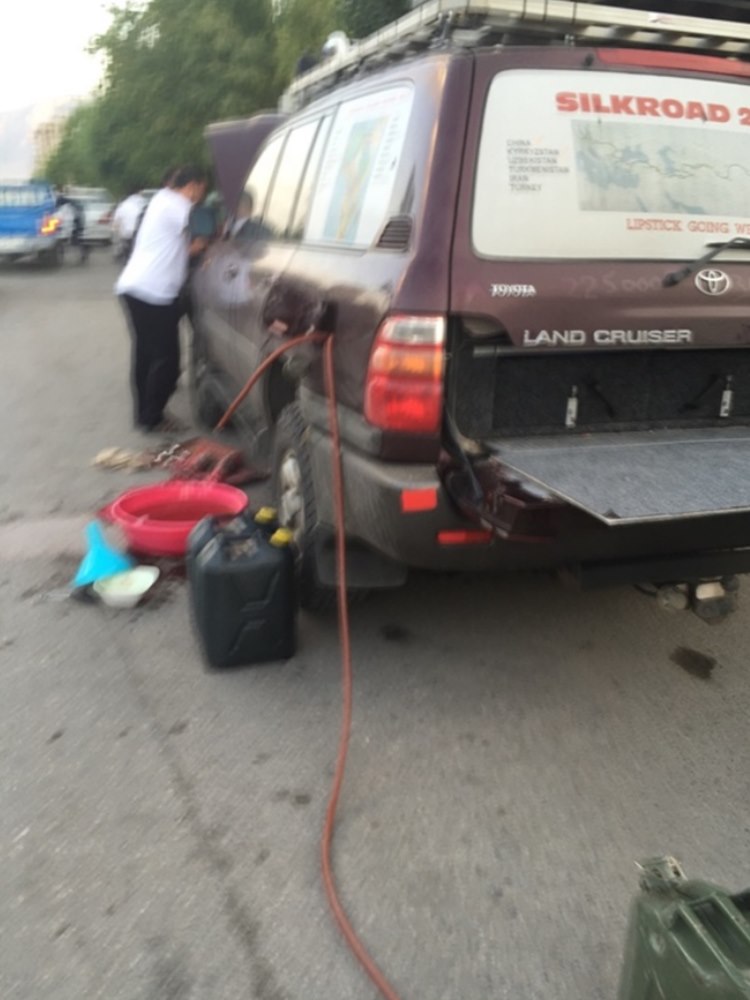 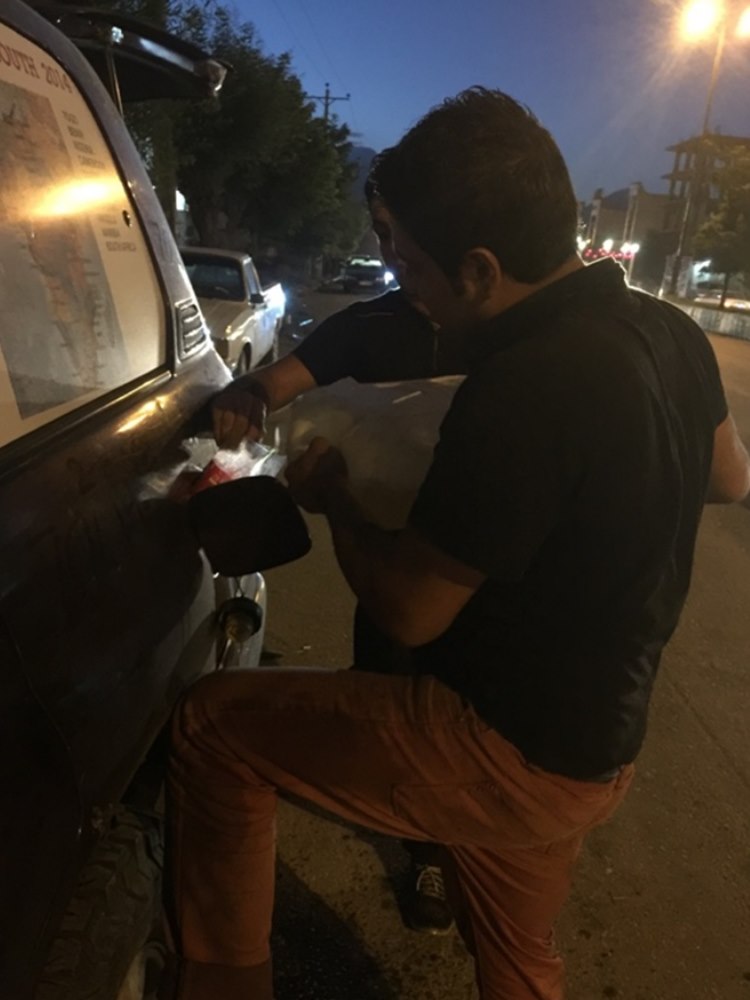 fill the car up to maximum capacity.

The whole operation took about 4 hours and the bush mechanics at work were really great and could not be thanked enough by team Lipstick.

The time now was 10:30pm and after having received reassurance that the border posts work 24 / 7 the boys decided to rather make their way into Turkey than to find a place to rest in this small Iranian border town.

Iranian border procedures went amazingly fast – no offloading of luggage for checking, officials extremely friendly and after some 30 minutes Lipstick was released out of Iran with the carnet de passage duly stamped.
The procedures on the Turkish side were even faster and the boys guessed that the officials may not have a great interest to over do things at this time of the night.

Time of the night? the boys were told to switch their watches back by 1.5 hours so what was 11:30 in Iran all of a sudden became 10pm!

An added bonus came in the form of a duty free shop on the Turkish side and Andre was able to purchase a bottle of finest scotch something which was not seen since leaving Azerbeidschan. Viva banghoo!

On the Turkish side of the border the boys passed many many trucks double parked and obviously waiting to get into Iran the next morning. This carried on for 12 km and the boys worked out that if a truck is 30m long in average than one could fit about 60 trucks in double park mode into a km! 12 km times 60 trucks meant that about 720 trucks were lined up to deliver goods to Iran in the next few days…! Simply amazing.

After about 35 km the town called Dogubayazit was reached were the boys found a motel but unfortunately all restaurants were closed up already.. 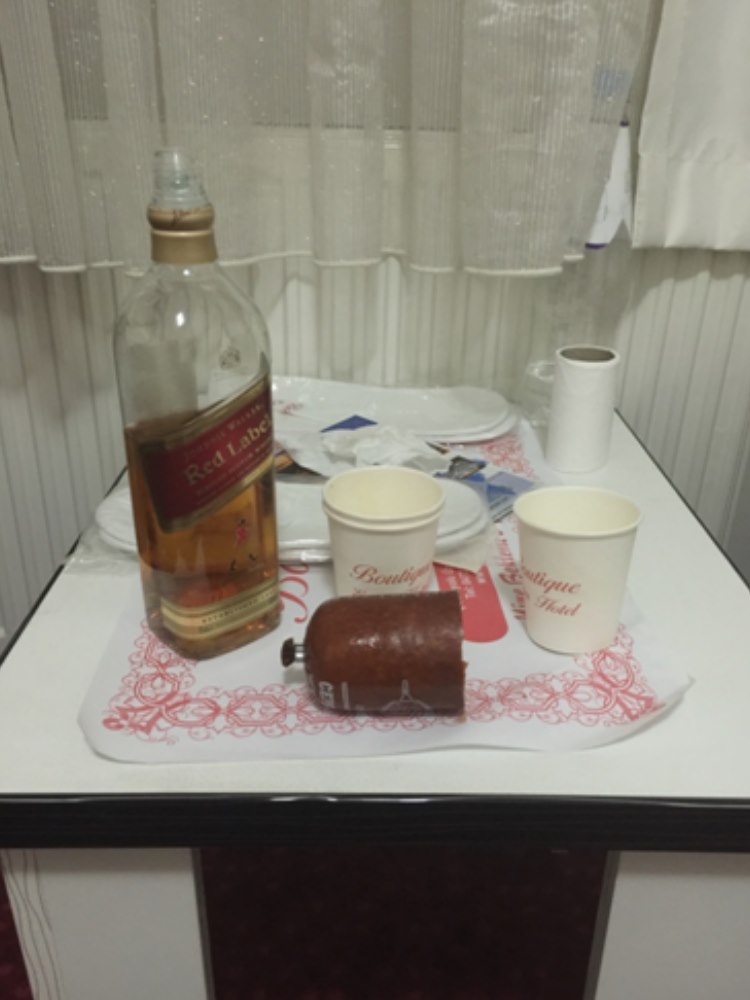 The problem was solved as Whiskey and Salami were available – Good night!