It was a long day on the ferry crossing the Caspian Sea with not much to do for the boys other than hang around in the cabin or walk around the ferry to stretch their legs.

Something similar like breakfast was served in the morning at 9am and another round of minute chicken pieces buried underneath a pile of rice was on offer for lunch.

At around 3 pm and some 100km away from Baku the ferry slowed down to almost standstill and team Lipstick was advised that the Baku harbour would have no space at the moment to allow Lipstick’s ferry to dock. Apparently there was another train ferry busy being loaded and only one train docking station is available. The boys were told that they might have to spend another night on the ferry. This was a somehow worst case scenario especially since all alcoholic beverages were consumed the night before and Lipstick’s bar was as dry as a desert.

So a further hang around period during which the team chatted to the train guys and a young man from Kazakhstan who was going to have a holiday with his wife in Azerbeidschan and Georgia. Of course the train guy and the holidaymakers were as disappointed as Andre and Willy about the hold up but there was nothing one could do. 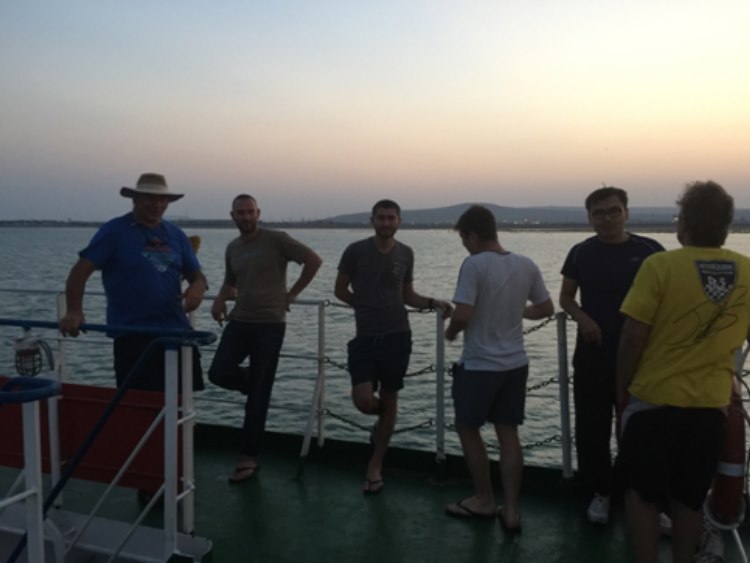 Team Lipstick and` newly found friends on the ferry between Aktau and Baku.

Great excitement however when at around 7pm the vice captain of the ferry advised with a broad smile that the Baku harbour gave advise that our ferry could come in now as the other train ferry was loaded and making space for Lipstick’s ferry.

So full steam ahead into the sinking sun and by 9pm the ferry could line up its railway links with those of Azerbeidschan. 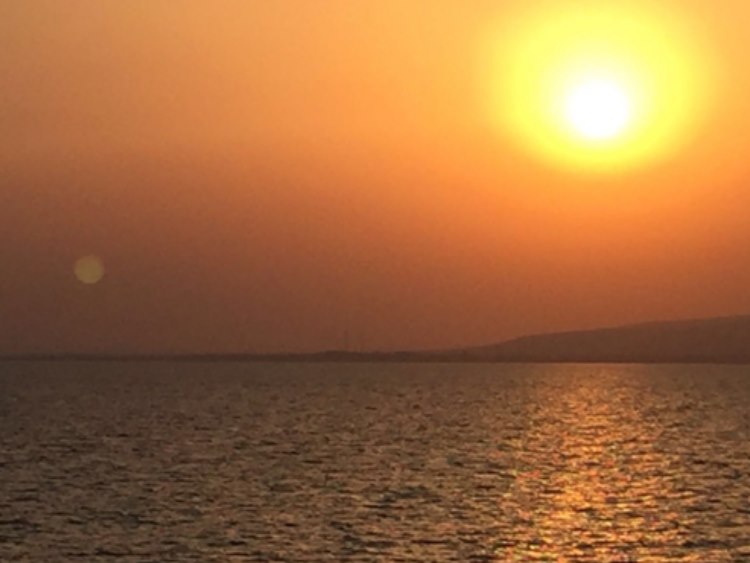 Sun is setting down as the ferry approaches Baku Harbour 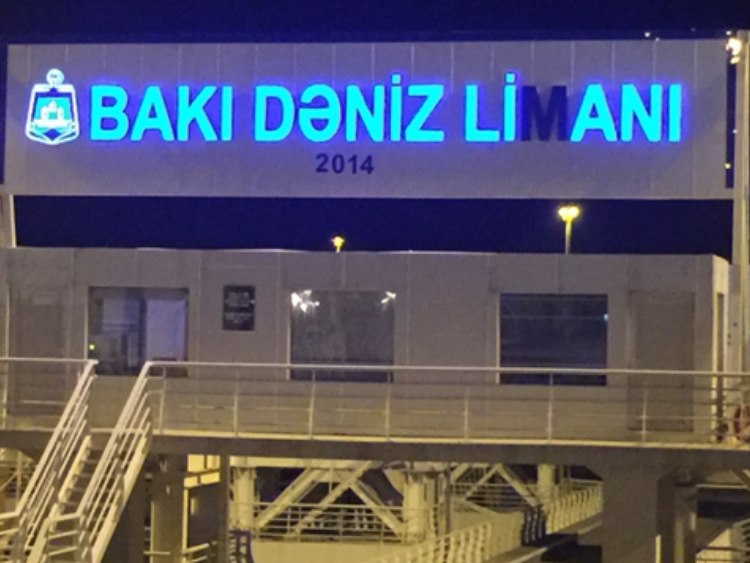 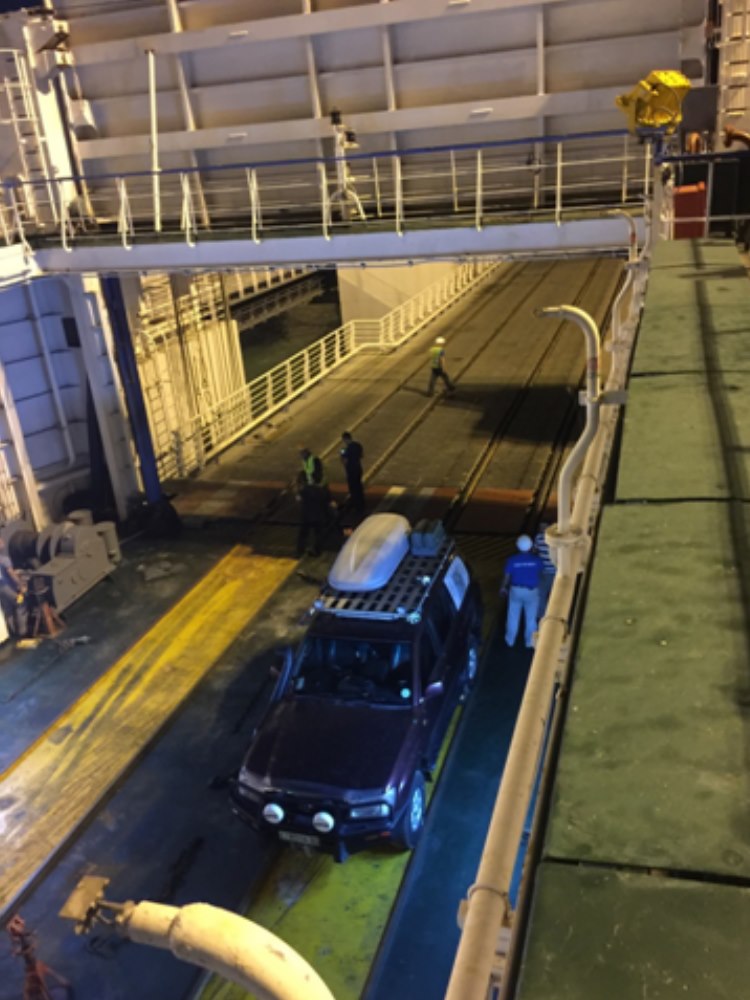 Passport control and Customs procedures took about an hour and the boys were grateful that the holidaymaker and his wife were also going to Baku and they were of great assistance to team Lipstick in assisting with translations- the border officials could hardly speak any English.

As the ferry landed in the new harbour of Baku this meant that Lipstick landed about 70km south of Azerbeidschan capital. The holiday makes were also stranded as there was neither a bus service or a taxi facility in sight.

Team Lipstick therefor offered the couple a lift to Bakuwhich was reached just before midnight.assisted by google maps the couple was dropped off at their guesthouse much to their delight and contact details were exchanged.

Another 10 minutes later Lipstick arrived Baku’s holiday Inn and were happy to see some luxury around after the rather uncomfortable past 26 hours on the ferry.

A Turkish restaurant was found closed by which even offered Pizzas but NO BEER.

Back to the hotel and the boys dropped into their beds at 2.30am…

Lovely breakfast in the morning where after the boys decided to explore Baku by food which was indeed very interesting as they walked along the par adjoining the main straight on which 4 weeks earlier the first ever formula 1 race was held in Baku.

It is located on the southern shore of the Absheron Peninsula, alongside the Bay of Baku. At the beginning of 2009, Baku’s urban population was estimated at just over two million people. Officially, about 25 percent of all inhabitants of the country live in Baku’s metropolitan area.

The town has quiet a few Irish pubs which are frequented by Australians and Britishcitizens who live in Baku and work on the oil rigs.

It was nice to chat to someone in English for a change instead of listening to some broken Russian/English voices. 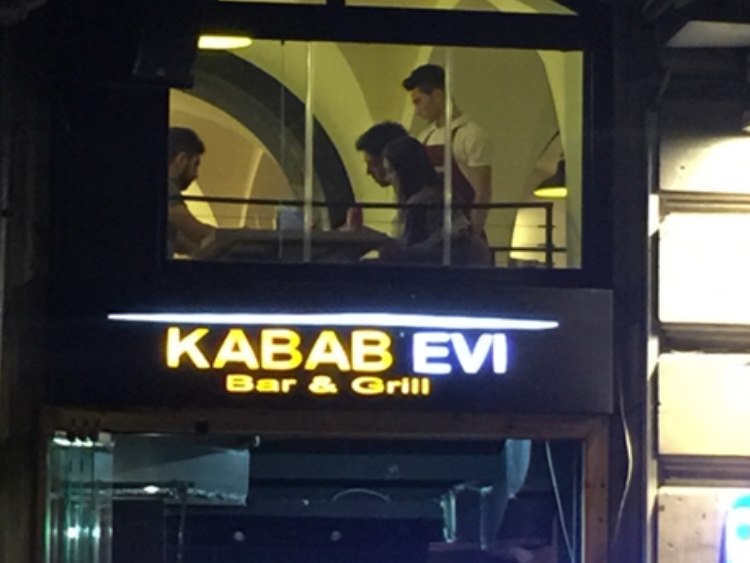 After some fish and chips the day ended with a good feeling for Azerbeidschan and its friendly people.