After a well deserved sleep the first task of the day was to find a bank with a ATM machine in order to get some of the Kazakhstan Currency called Tinge.

The 3rd Bank worked and the boys next task was now to fill Lipsticks tank again with Diesel and to their excitement a Petrol station was easily found and the price of Diesel was only 5.20 Rand / litre. 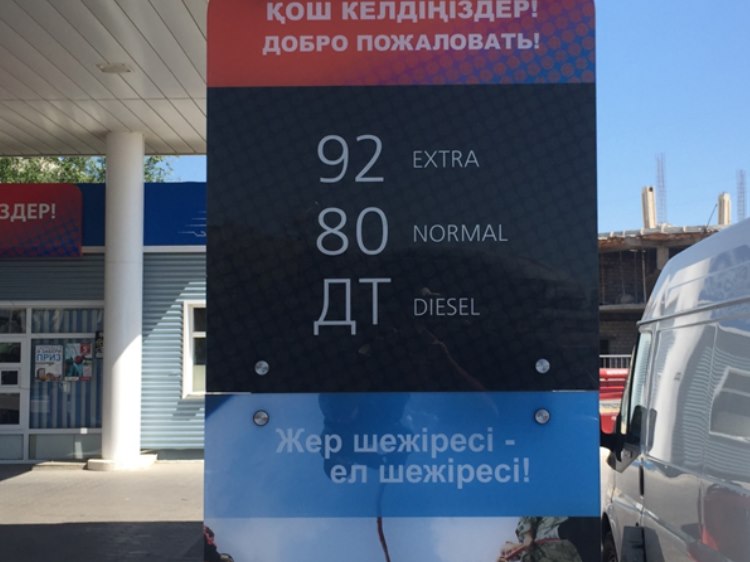 After having the tank filled to capacity it was decided to give Lipstick a total wash down and get rid of the desert road dust which appeared all over the Car.

With a good looking Lipstick, the guys went straight to the Ferry office in town with a taxi as the Garmin could not show any street navigation in town.

Aktau has got now street names as the whole town is divided into “Mini Districts” and each house in the mini districts has a number. 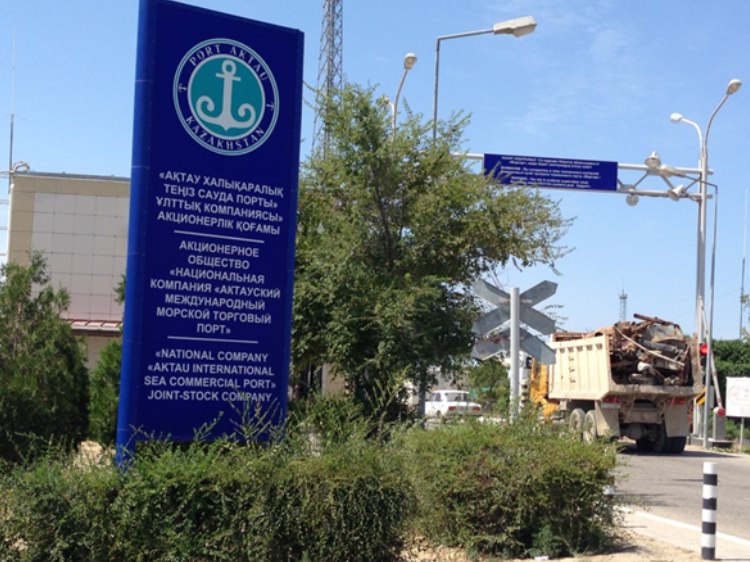 At the ferry office team Lipstick was told that they are too late for todays ferry and it is not sure when the next ferry is arriving from Baku and that in the next 2 days only train ferries will dock in Aktau so most likely the next car ferry will arrive in 3 or 4 days.

The procedure would be that one first has to go to the port and register the car on the waiting list and after registration one can buy ferry tickets back in the Ferry office.

The hotel manager then kindly offered that the next morning Andre and Willy could take the hotel’s bell boy with who could speak a fair amount of good English.

The evening was spent in an Italian restaurant close by and after another good night rest the tem was ready to tackle the car registration at the port of Aktau.

Unfortunately, however the bell boy was not available and after more discussions with the hotel’s manager he asked one of the two receptionist girls to accompany team Lipstick to the port – voila team Lipstick now had their own private secretary on board.

From now on procedures were easy – on arrival at the registration office there was no queue to wait in and the receptionist spoke with the officials like a Russian waterfall in fast and seemingly demanding manner.

How it happened is still not quiet clear but Team Lipstick was granted permission to go with the goods train ferry on condition that they buy a normal ferry ticket at the Ferry ticket office in town and be back within 40 minutes to start customs clearance and boarding procedures.

Lipstick was racing back to town, got the ferry tickets and back to the Hotel to fetch their luggage – however they handed in some laundry the evening before and the laundry was not ready yet.

The receptionist than told the boys not to worry and that they will use DHL to send Willy’s clothing to Baku by air later today.

All fine – clothing can be replaced but the ferry has highest priority right now so another race back to the harbour and back to the registration office where it was again confirmed that Lipstick can get onto the train ferry immediately after custom clearance and passport control. 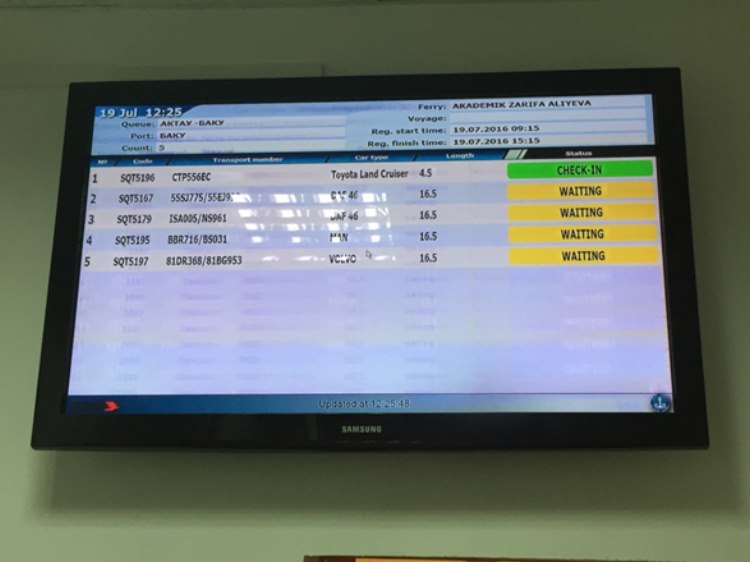 Lipstick can board the ferry boat – other trucks are on the waiting list – it is a lucky day for Team Lipstick..

The procedures were fast and painless, the boys gave Assem -the receptionist- a nice tip and extra money so that she can take a taxi back to the hotel and then Lipstick was allowed to get onto the ferry and park right behind the goods train.

Bibi Assem – you were a great help in getting Lipstick onto the Ferry…. 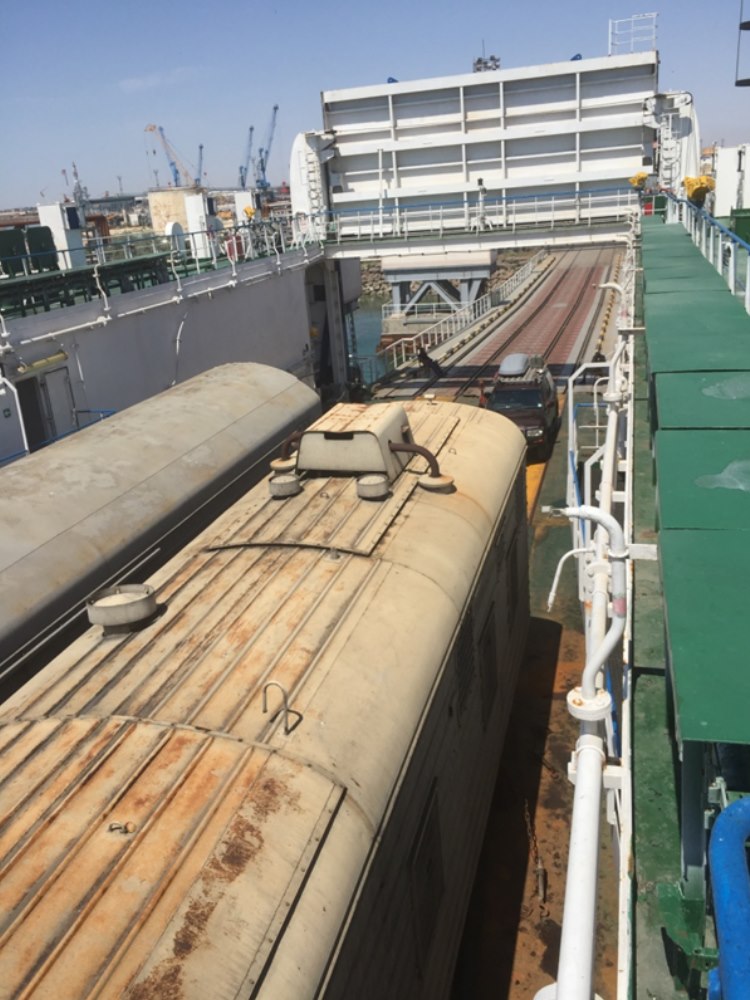 Lipstick was the only car on the ferry and 8 other passengers without vehicles were also on board besides the train crew and the ferry officials.

Team Lipstick was allocated a prison like cabin which they had to share with 2 other passengers on a double bunk sleeping facility.

The boys made it back to their car and took the camping chairs out the roof top box and opened a reserve bottle of whiskey and swallowed half of a salami which they had on board. 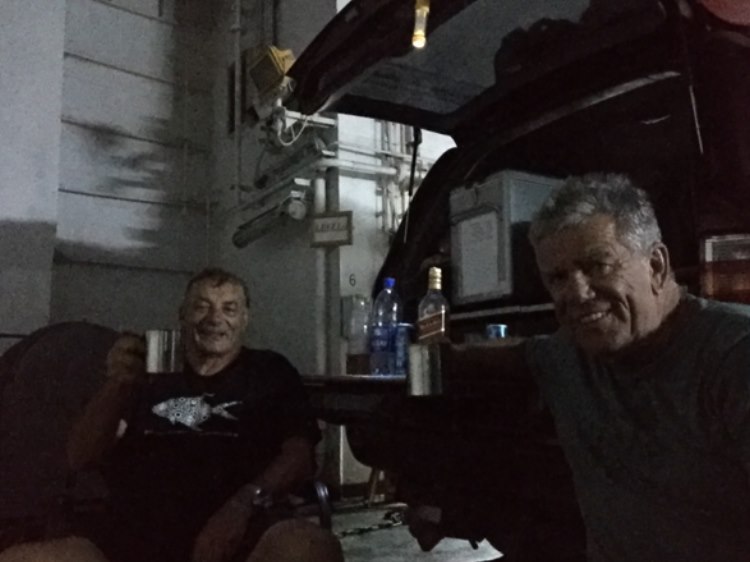 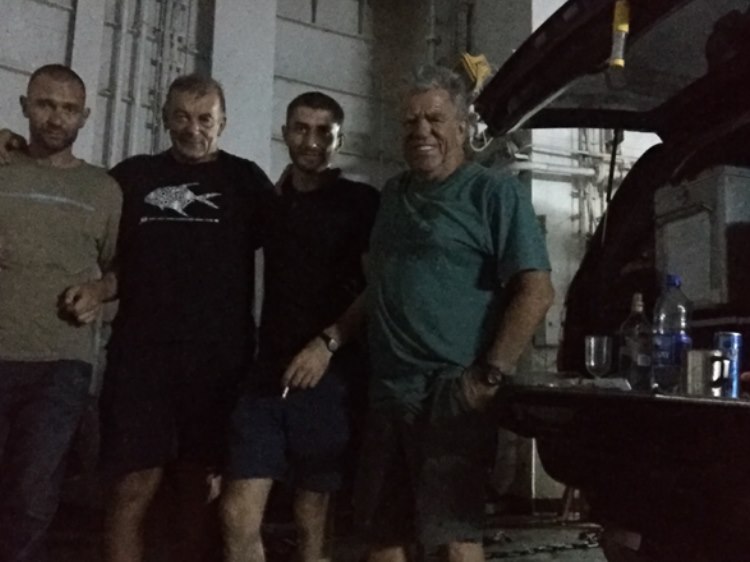 Team Lipstick with Serge ( left and ?? ) at Lipsticks bar counter…

They were soon joined by some other passengers and by midnight there was only air left in the bottle but the content which was consumed gave the boys enough fatigue to overcome the night in their cabin and wake up when the ferry was about 100km away from Baku in Azerbeidschan.