The team needs to head north today to Nukus which is the closest big town before the border to Kazakhstan. Whilst the original plan foresaw to travel from Uzbekistan to Turkmenistan and then to Iran this had to be abandoned due to the wisdom of the Turkmenistan government which refused visas for team Lipstick. Speaking to travellers along the road this seems to be a common problem and there is no logical explanation why Turkmenistan does not offer Visas for foreign tourists.

Therefor the plan now is to travel to Kazakhstan and then cross the Caspian Sea by ferry and reach Azerbaijan before entering Iran.

The first call of the day was to find Diesel but again the first few petrol stations just laughed and shook their heads “NO Diesel “.

So the boys went out of town hoping to find suitable petrol stations along the way but some 24 km out of town all of a sudden the left front break failed totally.

To avoid further risks, the boys made a U-turn back to Bukhara and stopped at what looked like a petrol station. With very or non existing knowledge of the Russian language the team was able to convince a young petrol attendant that Diesel is a high priority for them. 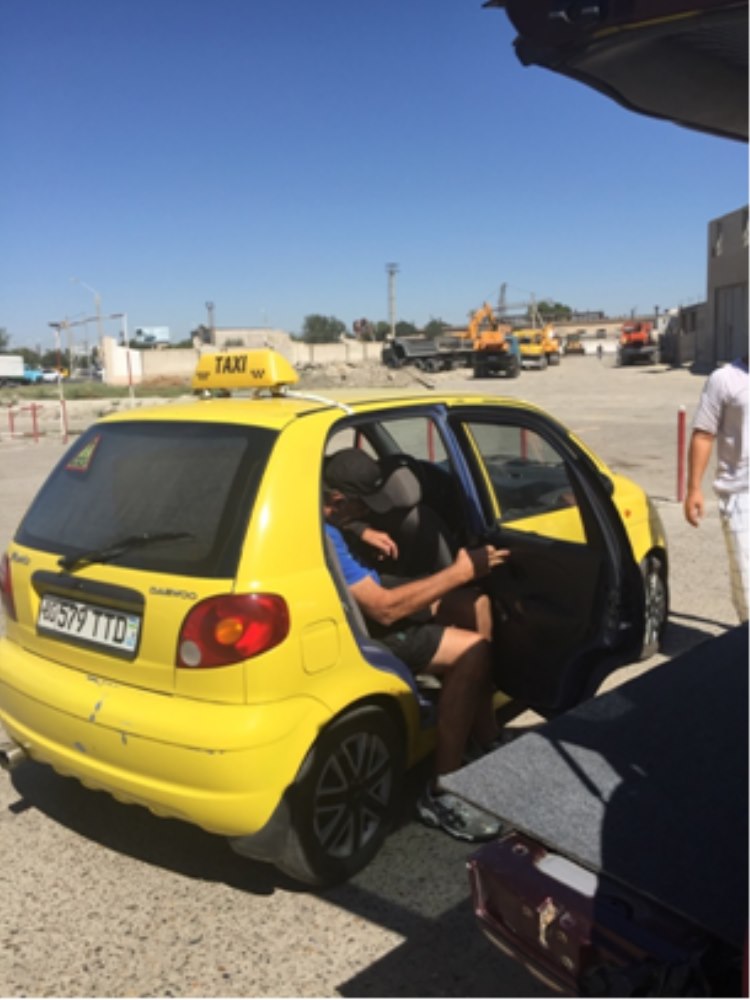 Confucius already mentioned that not all men can fit into Asian cars….

So Andre got into the taxi after having emptied the 2 jerry cans -which Lipstick had on the roof rack- into Lipsticks tank and went off whilst Willy was trying to get rid of the Diesel in his mouth as it was his turn to suck the Diesel through the pipe from Jerry can into the tank – his shirt also needed to be changed.

Andre came proudly back producing 2 full Jerry Cans of diesel from the friend of a friend and it was now time to ask the taxi driver and the young petrol attendant whether they can assist with new break pads for the left front tyre of Lipstick.

Again the taxi driver mentioned that there is another friend who is a Toyota specialist and that Lipstick should follow him through the heavy morning traffic in Bukhara.

Keeping in close distance to the taxi driver in front Willy suddenly lost control over the steering wheel which stopped responding.!?

What a disaster in middle of big traffic and the taxi driver is way ahead on the horizon. Having stopped Lipstick and trying to put it into gear the team realised that this is also no longer possible.

No what?  Willy changed the gear mechanism from high to low gear and this seemed to function however at very low speed and thanks to all powers to be the taxi driver realised that Lipstick has fallen behind and made a U – Turn to fetch them again.

Limping through town on low gear and totally inaccurate steering the boys reached a backyard garage after an awful 15 minutes’ drive on the outskirts of Bukhara.

Amazingly the garage owners 14-year-old son could speak fairly good English and in no time produced a set of brand-newdisk pads for the front breaks.

The whole wheel hub seemed to have come loose and this caused it to disconnect from the steering mechanism which explained the steering problem – the loosed hub wandering to the inside and to the outside also caused the brake pads to having been ground to zero and running metal to metal.

After dismantling the hub one could realise that the 2 nuts which hold the hub in place did become loose and one can only imagine what could have happened if that would have happened at Lipstick’s preferred speed of 140km/h….

Trying to put the old nuts back was unsuccessful as the threads had been destroyed totally.

The only solution which the taxi driver suggested was that he can try to contact one of his other friends who might have new nuts in stock on this Saturday afternoon.

Off he went and after some 45 minutes he returned with a huge smile on his face producing brand new lock nuts for a Toyota Landcruiser 100 series!

Viva bang hoo and high five to all friends of taxi drivers around the world!

Half an hour later Lipstick was “on the road again” with enough Diesel, new brake pads and a tightly secured left front wheel hub.

The drive to Nukus was pleasant but again through rough roads at first leading to a beautiful new road which ended some 130km before Nukus and became pothole alley again.

Nukus is the closest town to the Kazakhstan border in the western area of Uzbekistan.

Many centuries ago the ancient city Shurcha was on the site of current Nukus. Now this ancient town can be seen in the northwestern part of Nukus. According to historians, the town was one of the defensive fortresses, protecting the border of the ancient state of Khorezm and controlling the waterway on Amu Darya. Local people say that until recently remnants of walls and towers could be found in the area of Shurcha town.

The name Nukus is associated with the old tribal name Uzbeks – Nukus.[1] Nukus developed from a small settlement in 1932 into a large, modern Soviet city with broad avenues and big public buildings by the 1950s. The city’s isolation made it host to the Red Army‘s Chemical Research Institute, a major research and testing center for chemical weapons.

Formerly one of the four largest lakes in the world with an area of 68,000 km2, the Aral Sea has been steadily shrinking since the 1960s after the rivers that fed it were diverted by Soviet irrigation projects.

By 2007, it had declined to 10% of its original size, splitting into four lakes – the North Aral Sea, the eastern and western basins of the once far larger South Aral Sea, and one smaller lake between the North and South Aral Seas.

Satellite images taken by NASA in August 2014 revealed that for the first time in modern history the eastern basin of the Aral Sea had completely dried up. The eastern basin is now called the Aralkum Desert.