Early start today and the boys took off to see the big Buddha temple and on the way to there the team had to cross a square where various groups of Chinese pensioners had their morning dancing session. This seems to be quiet common in China as most pensioners live in small homes with not enough space to entertain their friends and family so they meet often early in the morning and start the day with a bit of dancing to loosen their bones. 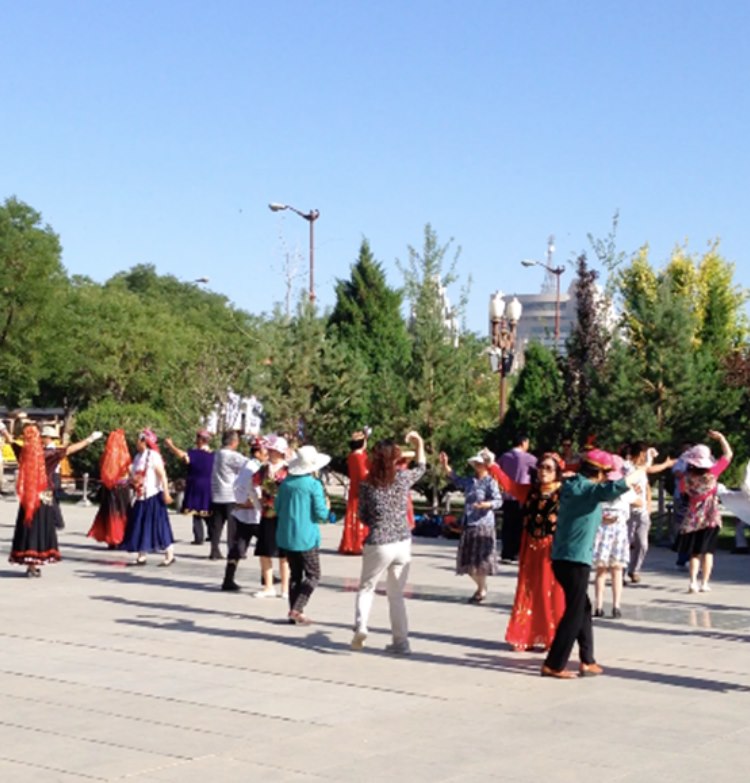 Happy pensioner at 8:30 in the morning in Zhangye dancing on the square 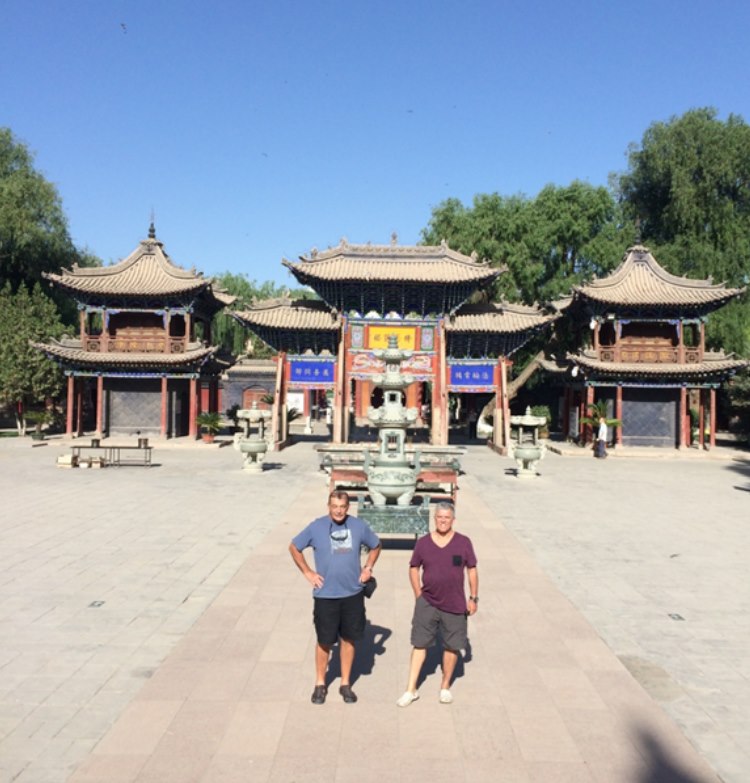 Legend has it that a chancellor named Wei Mie of the Western Xia period ordered workers to dig into the ground to 1 to 1.3 meters deep to carve a reclining Buddha to be covered with glazed color tiles. The Giant Buddha Temple was built in 1098 to house the Buddha.

The two-storied Giant Buddha Hall is 33 meters high, 49 meters wide and 24 meters long, with a total area of 1770 square meters. The gold-plated and painted Giant Buddha lies in the Nirvana situation in the middle of the hall. The whole Buddha is 34.5 meters long and 7.5 meters wide between its two shoulders, with feet of 4 meters and ears of 2 meters. 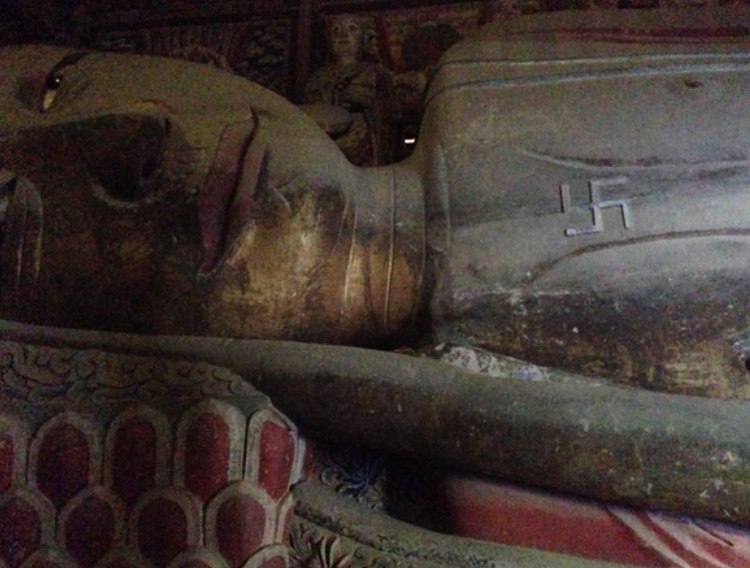 The Zhangye Danxia National Geological Parkalso known as Zhangye Danxia (Landform) Geopark, is located near the city of Zenzhe in China’s northwestern Gansu province. It covers an area of 510 square kilometers (200 sq. mi). Formerly a provincial park and scenic area, it became a national Geopark in November 2011.Known for its colorful rock formations, it has been voted by Chinese media outlets as one of the most beautiful landforms in China.

Danxia is known for the unusual colors of the rocks, which are smooth, sharp and several hundred meters tall. They are the result of deposits of sandstone and other minerals that occurred over 24 million years. The result, similar to a layer cake, is connected to the action of the same tectonic plates responsible for creating parts of the Himalayan mountains. Wind, rain, and time then sculpted extraordinary shapes, including towers, pillars, and ravines, with varying colors, patterns, and sizes. 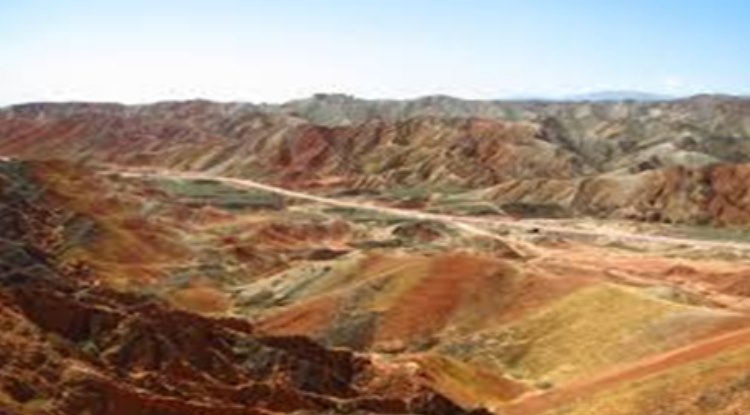 A very colorful range of mountains forms part of the park

On arrival in the park Lipstick needed to be parked off as no private vehicles are allowed to drive inside the park area and all visitors will be transported by a hop on hop off shuttle bus system. 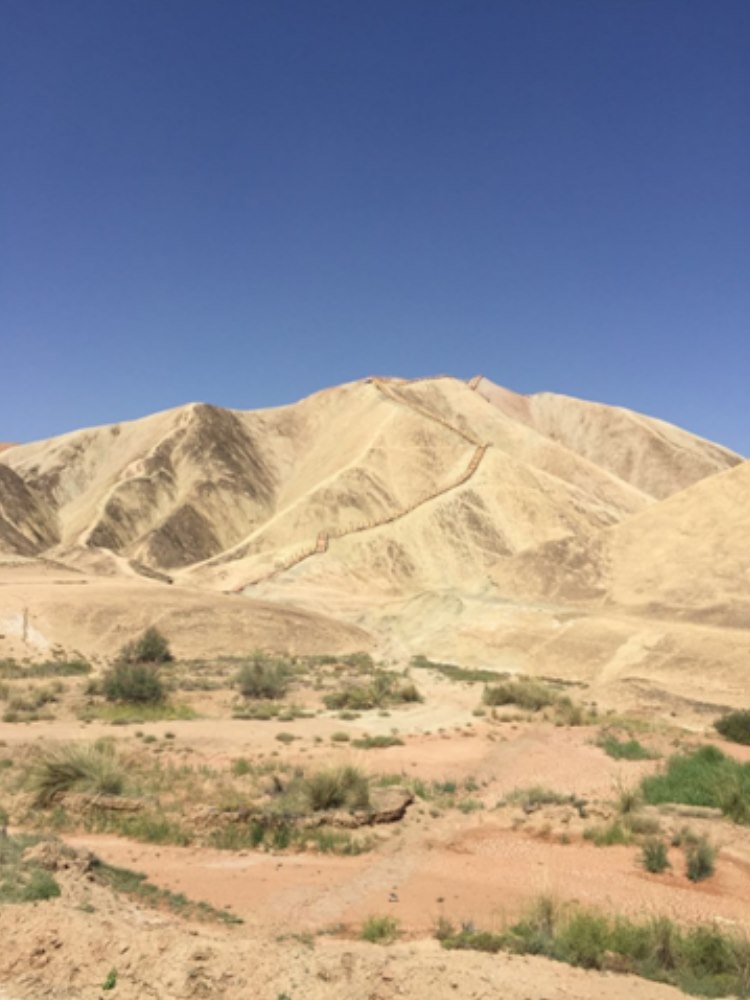 It was very hot in the upper 30 degrees but eventually Andre and Willy reached the peak and were rewarded with a beautiful view. 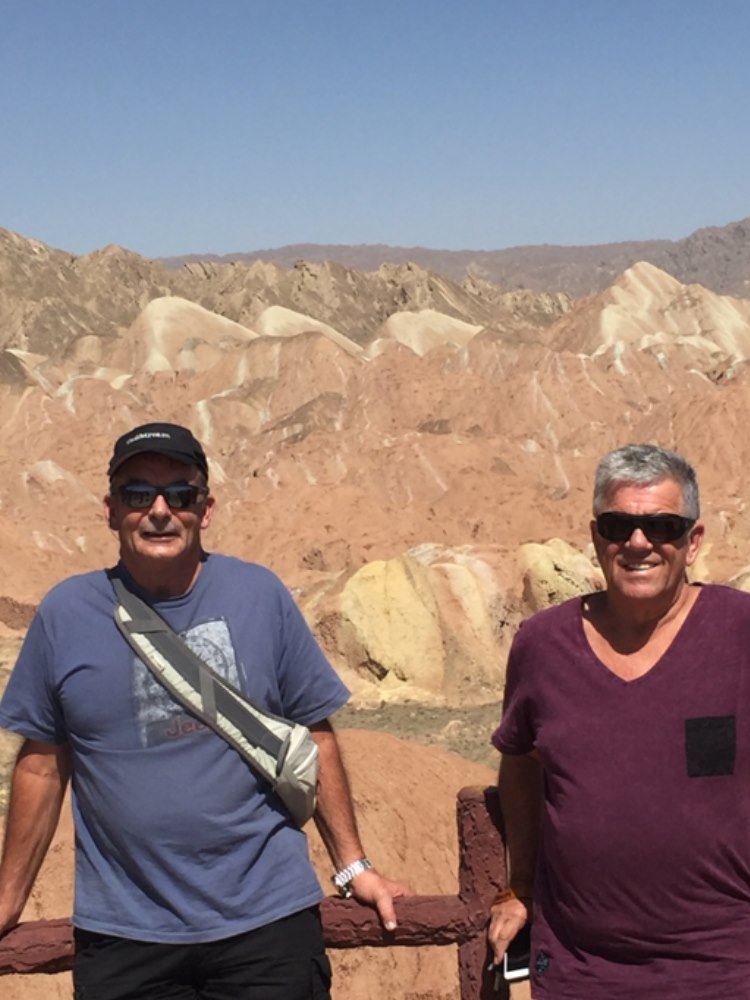 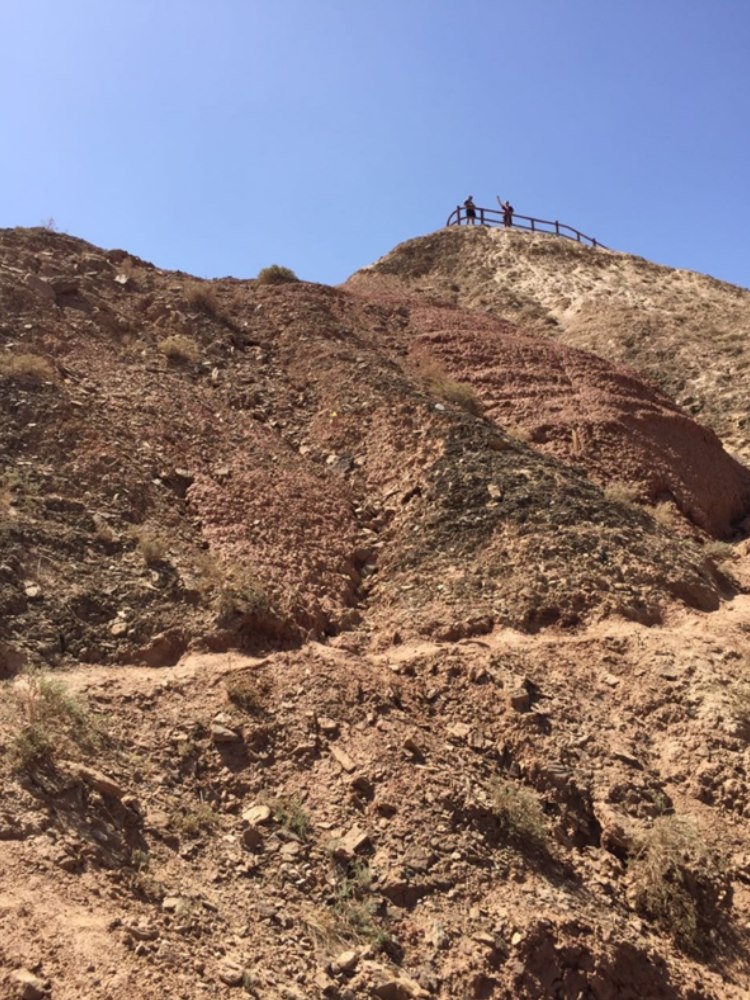 Driving on to Jiayuguan we passed the Jiayu Pass which is the most western part of the great wall of China. In ancient times this formed the western border of the Chinese empire where visitors from other countries would arrive and from where Chinese explorers left their homes for years to discover other countries and report back after many years to their emperor what they have seen.

There are two gates: one on the east side of the pass and the other on the west side. On each gate there is a building. An inscription of “Jiayuguan” in Chinese is written on a tablet at the building at the west gate. The south and north sides of the pass are connected to the Great Wall. There is a turret on each corner of the pass. On the north side, inside the two gates, there are wide roads leading to the top of the pass.

Jiayuguan consisted of three defense lines: an inner city, an outer city, and a moat.

A fabulous legend recounts the meticulous planning involved in the construction of the pass. According to legend, when Jiayuguan was being planned, the official in charge asked the designer to estimate the exact number of bricks required and the designer gave him a number (99,999). The official questioned his judgment, asking him if that would be enough, so the designer added one brick. When Jiayuguan was finished, there was one brick left over, which was placed loose on one of the gates where it remains today. 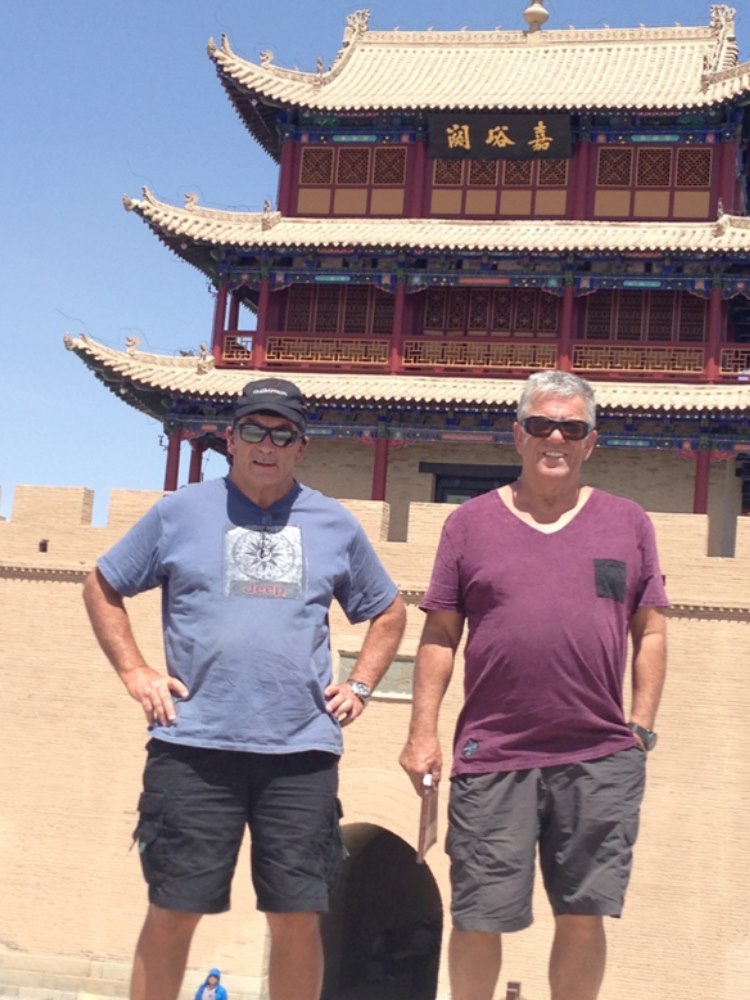 The end of the Great Wall of China on the western side has been reached. 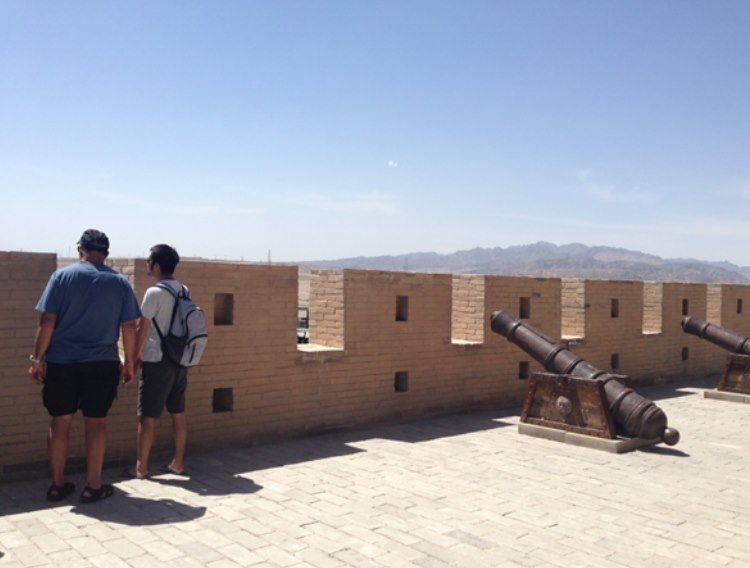 Andre and Andy deciding where to go next……