Team Lipstick decided for a rest and admin day today in Bamako.

The visa for Burkina Faso only allows entry as from 29th June so the task was to enquire from the Burkina embassy whether it would be possible to enter 2-3 days earlier..

Luckily in Bamako (as in many capitals) most neighbouring countries have an embassy of at least a consular office. To avoid driving through chaos traffic Andre and Willy decided to rather use a taxi (which is also not for the faint hearted…)

A friendly Lady at the Burkina Faso office explained to team Lipstick that she believes that the visa would be good even if one enters the country a few days before the official visa entry date – however she can neither guarantee this nor can she give and change to the existing visa….

The Visa service agency in South Africa advised team Lipstick that they would get the visas for Benin and Togo on entry of these countries –but- having some time on their hands Andre and Willy decided to also pay these embassies a visit.

Doesn’t the word “embassy” have some meaning of grandeur and the automatic vision of a presentable building promoting the country it represents? Well this might be slightly different in Africa as these embassies have a rather low profile view when it comes to their offices… 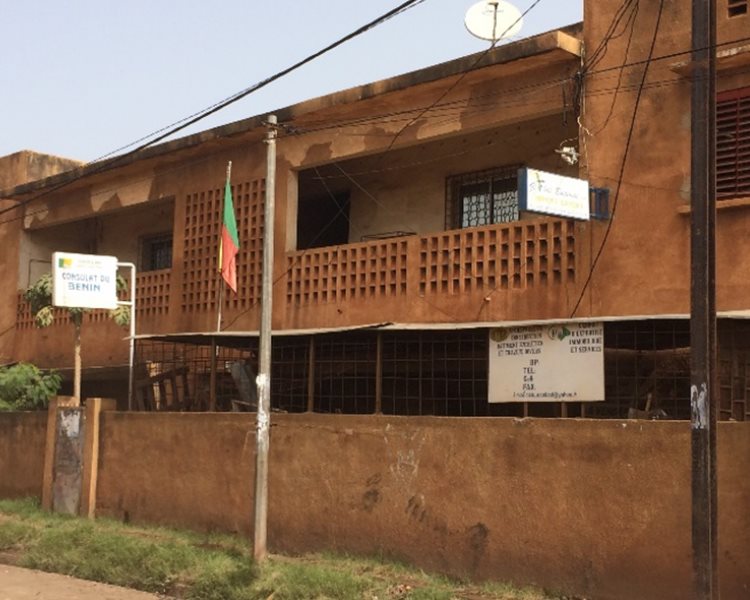 In Africa as these embassies have a rather low profile view

…at least the flag is flying high but team Lipstick still had to cross a backyard to represent their case for a visa.

The sleepy Lady at the Benin office was clearly not impressed that we interrupted her tranquil work environment but reaffirmed the team that one can get the visa when entering Benin from Togo at the border control….

So off to the Togo Consular offices which resides in a similar structure to that of BENIN however a very efficient Consul immediately proceeded to issue visas for Togo to both Willy and Andre in great speed and for the bargain price of 50.000 Caf ( 1000,–Rand ) each. Obviously the Togo Consul was   more business orientated than the female employees in their neighbouring states embassies….…a 1000, — Rand page…….

Back to the residence where the chief security guard keeps the best parking space for LIPSTICK!