As can be seen on the map above the distances in the Northern Territories are big between villages – but due to very good street condition and a manageable 130km/h max speed one can manage big distances in a Day.

So, Team Lipstick set off and first had a look at the “Devils Marbles”

Devils Marbles Conservation Reserve is a protected area in the Northern Territory of Australia located in the locality of Warumungu about 105 km south of Tennant Creek, and 393 km north of Alice Springs.

The Devils Marbles are of great cultural and spiritual significance to the traditional Aboriginal owners (Ree) of the land, and the reserve protects one of the oldest religious sites in the world as well as the natural rock formations found there. Karlu Karlu is the local Aboriginal term for both the rock features and the surrounding area.

he Devils Marbles are large granitic boulders that form the exposed top layer of an extensive and mostly underground granite formation. The natural processes of weathering and erosion have created the various shapes of the boulders. Some of the boulders are naturally but precariously balanced atop one another or on larger rock formations, while others have been split cleanly down the middle by natural forces.

The drive continued towards Alice Springs and the boys crossed the Capricorn already a second time on this trip before arriving at Alice Springs.

Alice Springs is a remote town in Australia’s Northern Territory, halfway between Darwin and Adelaide, both 1,500km away. It’s a popular gateway for exploring the Red Centre, the country’s interior desert region. Its 1872 origin as part of the Overland Telegraph Line (linking Darwin and Adelaide) is preserved in the vintage buildings and equipment at the Alice Springs Telegraph Station Historical Reserve.

Originally Team Lipstick planned to stay over in Alice Springs but as it was still early afternoon they decided to try and get towards Ayres Rock to see the Sunset there.

A quick refueling and the boys were on the way toward the Ayers Rock Resort.

On the way there they quickly booked themselves into a roadhouse in Curtain Springs and just made it to Ayres Rock some 20 minutes before sunset.

Watching Ayres Rock or Uluru as it is recently called at sunset is almost a must as the colours of the Australian outback are never more vibrant then at sunset. 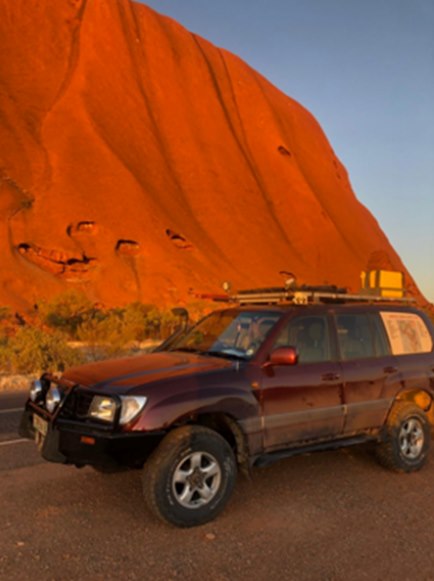 The sun went down fast and the boys decided to return the following day to further explore the area – they therefor drove back to Curtin Springs (76km) where they had a good rest.